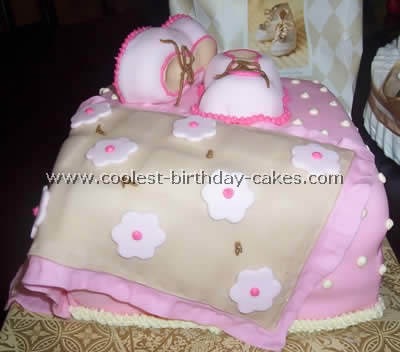 Here are some very cool baby shower cake pictures of our baby shoes cake. I made this cake using 9″ square pans and two Duncan Hines marble mixes. After they cooled I leveled them and split them in half horizontally so that the cake would have four layers and more frosting to compensate for the fondant (which I think tastes horrible). After frosting a crumb coating I covered with pink tinted fondant.

The booties are made out of three cup cakes (do a search for “baby booties cake” and you will get detailed instructions and you can also check out other baby shower cake pictures). I covered them with fondant and piped buttercream icing shoelaces in.

The quilt is made from all fondant, cut two rectangles the same size. Between those two rectangles place small squares of fondant for the quilt effect. I also added strips of ruffled fondant between the layers for the ruffles. The entire thing stays together by brushing water between the pieces. The flowers on top are also fondant made by a flower shaped cookie cutter. After placing all the fondant pieces on I piped in the edging and dots.

This cake is so pretty as you can see from the baby shower cake pictures. And not so difficult either! I like to use a round cake but use whatever you like. The pair of booties is made from three cupcakes. Ice and decorate the base cake how you like. For each bootie you will use one cupcake (upside down) and then ice a half cupcake to it for the back end of the bootie.

You will use a star tip and a “w” action all around the bootie for a neat crochet effect. I like the two-tone look or you can go with one all-over color. Dig out a bit of the upper cupcake to create a dip in the cuff of the bootie. When the booties are set enough to move, place them on the cake. You will need to edge around them (I used the shell trim). The ties are a star tip also but you could use real ribbon if you like. Enjoy!!

I baked two 9’round cakes then proceeded to cut out a shoe footprint from each cake. I cut out an oval shape from each cake and placed the oval shape on the top half of each foot print, using royal icing as glue.

With remaining cake I cut out blocks and used store bought candied letter’s to spell “welcome”. I decorated booties and blocks with pink tinted royal icing and white. Then cut up some pink ribbon for the little bows.

We took many baby shower cake pictures for our baby album to have as memories!

To make the booties I used 3 cupcakes.

I cut one in half vertically and placed each half beside a full cupcake to get the right shape.

A Two-tiered baby shower cake for a couple’s first child together. Each layer was frosted separately with pink and blue icing, since they did not know if the baby was to be a boy or girl. The baby booties on top are made from cupcakes.

I made this baby cake for my good friend for her baby shower. I bought 2 boxes of cake mix in chocolate. This cake was made in a 10in. cake pan. I made the cake then I used a muffin pan for the booties which is 1 1/2 muffin for each bootie.

I then made butter cream icing. Start off by icing the lower layer of the cake. Then you trim the sides of the whole muffins, this is 4 sides you’ve cut, cut the last muffin in half which would be for the toes of each bootie. Trim the toes to shape then use a little icing in between the whole muffin and toes part to hold in place. Then you cut a small portion of the top of the muffin to form the bootie, place in the middle of the cake and decorate with tip 16.