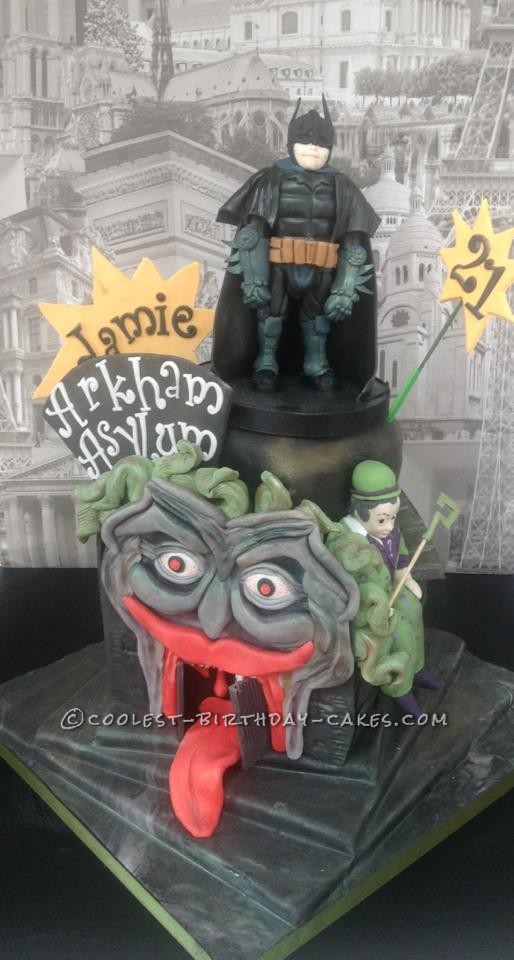 I made this Batman birthday cake – Arkham City Asylum for my son’s friend’s 21st birthday. He loves Batman, Joker & Riddler!

I quizzed my son and he suggested basing the Batman birthday cake on the game version rather than film versions. The game is darker and a bit more unhinged than the films!! Arkham Asylum being a big part of it. Online is where I searched for reference as I had NO idea what it was, being over 21 lol!  I loved the Joker’s face being the entrance  to the fun house, the cake evolved from that image .

I wanted the Batman birthday cake to be a wonky cake to suit the unhinged idea. The bottom tier is a double height square and a single top tier square which were carved wonky in all directions. I freehand cut out building shapes from embossed black  fondant all different, and let them dry. I put yellow icing behind some windows to create light.  To continue to wonky theme, I offset cake boards to give an unusual step entrance to the fun house. They were covered in a black/grey marbled fondant.

When building shapes were dry, I stuck them around the bottom tier in layers to create a city shape, trying to give depth and various heights to the scene.

I loved sculpting the Joker face/entrance, fondant was layered up to create the muscular look of the face in the game. I think I started channeling Joker during this as the occasional manacle laugh escaped , and I was starting to resemble him with bloodshot eyes!!

Batman himself I modeled separately on a base so that he could keep him afterwards. In the game he is an armored Batman, so had to add a lot of  details, and working on his codpiece raised a smile or two!! I also modeled a Riddler figure who sat on the cake and also hid a Riddler trophy on the cake as this is something you have to find during the game.

The whole Batman birthday cake including figures was dusted with various colors to create more depth to Joker’s face. Iridescent lustre dusts in blue/purple/green were dusted all over the buildings/steps and Batman figure to add atmosphere.

The cake was a devils food cake on the bottom, thought that suited the sinister theme!  And a marbled choc/vanilla cake on top. Both were covered in chocolate ganache and black fondant.

I was thrilled with the final cake and Jamie loved it too which is more important. Now got to think what to do for my son’s 21st!