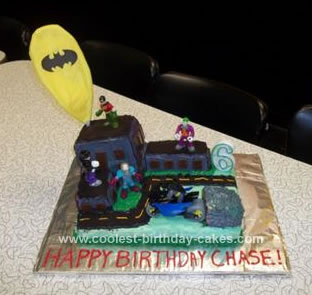 The little boy that I babysit was turning 6. I wanted to surprise him at party so I only asked him what his favorite superhero was (at this moment, since it changes often). He told me Batman. He was having his party at a kid’s restaurant, so there was not a theme to correspond the cake to. I looked over several ideas of various superheroes and kind of ‘smashed’ the ideas together based on toys I had that I could incorporate without having to buy anything additional and not have to use any fondant (I personally hate the stuff, especially in Mississippi hot summers). I did everything for less than $20.

I first did a 9×13 chocolate fudge cake. Then I made a red velvet cake baked in one regular loaf pan and two small loaf pans. After they cooled, I leveled out the 9×13 and the large loaf pan and one of the small loafs I cut the other small loaf in half and then leveled only one side. I carved the non-flattened half to shape it a little more like a cave. The next morning I cut the large loaf in half and stacked it on itself. I frosted the chocolate cakes with light green colored vanilla frosting. I frosted the red velvet cake with dark gray colored cream cheese frosting. I then threw them in the freezer for a few hours.

Later I separated out the remaining frosting and colored it. I covered the ‘cave’ with light gray and distressed the frosting to give it more of a rustic feel. I melted some Hershey’s bars and applied it to the ‘cave’ exit that I carved into to create a little hole and stuck it in the freezer to harden. Then I assembled the cake and placed the loaf cakes on top of the base cake and placed several long dowel rods through these cakes to help keep them in place. I trimmed out the buildings in black and added cut up Hershey’s bars for the windows and crushed Oreos for the roof tops. I trimmed out the road and filled it in with crushed Oreos and added yellow stripes. Then with piping gel, I piped the words on in his favorite color on the board. To finish it out I put the ‘cave’ on the cake and applied dark green ‘grass’.

Once I arrived at the party, I added the candle and the characters on to create the scene. My idea was Robin was setting off the Bat-Signal because Penguin, Joker, & Mr. Freeze on their way to get him and Batman racing on his motorcycle to come save the day. I created the Bat-Signal using two pipe cleaners cover with half a sheet of yellow tissue paper and I cut out the bat and glued it on. It was light enough that the pipe cleaners kept it in the cake easily enough.

As it set over the course of the day making it and waiting in the refrigerator until the next evening to deliver it, the gray colors starting turning purplish (not sure if it was the cream cheese frosting with black coloring or because it was against a red cake) and the one corner started to lean. Evidently, the base case was not 100% flat and one corner started to lean but it was not going anywhere because of the dowel rods. Not truly professional looking, but not bad for my 2nd attempt at doing something like this.

The kids absolutely loved it, especially the birthday boy. He gave me the highest compliment he knows how to give: “That’s awwwesommmme!” Even the adults were thrilled with the result. 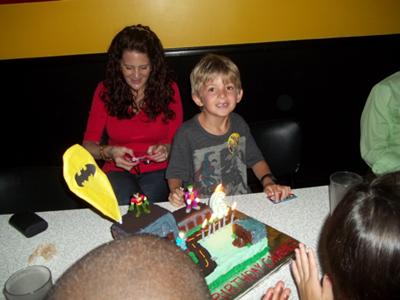 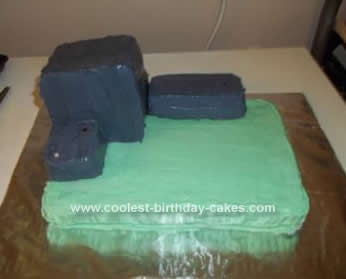 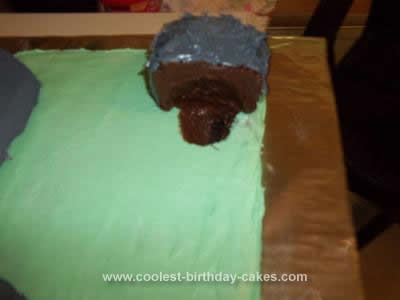