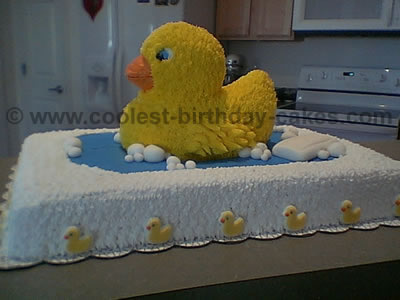 Here is a baby shower cake I made for my sister. I formed the soap and bubbles out of fondant icing. This came out to be one of the coolest birthday cake designs! 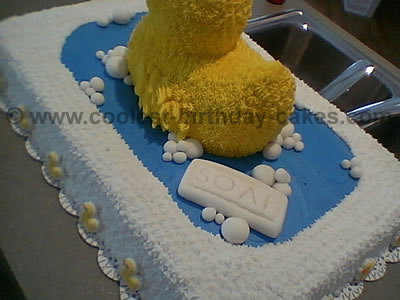 One of the Coolest 3D Ducky Birthday Cake Designs 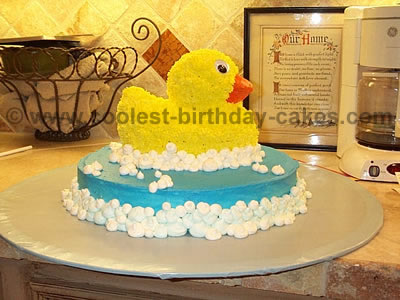 This is one of my favorite birthday cake designs.

I had planned on making a rubber ducky cake and some cupcakes, but my daughter invited more than that would feed. For the base, I used the Wilton 14″ round cake pan. I frosted the cake with various blue colored frosting that looked like water, then piped on white bubbles for the bathtub effect.

In addition, I also made a smaller version of the big cake for my grandson Ethan to eat (smash) on his own. We all wore shower caps and ducky feet made of fun foam. Our centerpieces were floating ducks in blue bowls and we had white and clear balloons. It was very bubbly and fun. 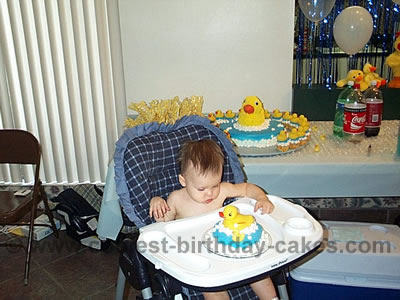 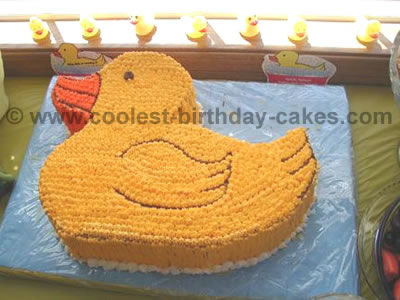 I made this cake after lots of consideration on duck-shape birthday cake designs.

Instead of buying the 3D pan I made this 2 layer cake. To shape a cake, you can use any image. So, I used the duck pattern from the invitations I made. In order to do that, I printed my pattern in a bigger size and taped it together to place over the cake. Before shaping a shape, definitely put it into the fridge. It will be much easier and less crumbly to cut the shape out when it is chilled.

After cooling I put the 2 layers together and cut it out. Then frosted with a star tip. It turned out really great and everyone loved the rubber ducky theme. 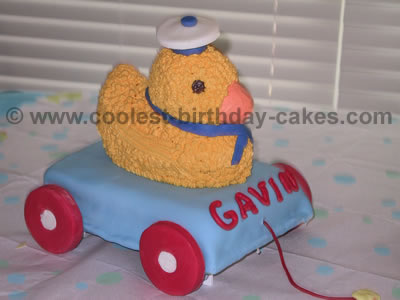 My mother made this adorable cake for my son’s 1st birthday. It is decorated with a combination of fondant and frosting.

To create the wagon on the bottom, she baked a 9×13 sheet cake and then set it on a foil-covered cardboard rectangle. To make the wheels, we colored fondant red and shaped it into a circle about 1 1/2″ thick. The circles were cut out with a metal cookie cutter. To connect the wheels to the cake 2 dowel rods were inserted near the front and back. The inside of the wheels were pressed into the dowel rods and a small dollop of fondant covered the indentation. We had a cake wagon that actually rolled!

The handle was edible and made out of a licorice string set about 1/2″ into the front of the cake. The duck was baked in a 3-D duck pan. It was decorated in a star pattern with buttercream icing. Fondant accents finished off our little duck. The sailor tie was cut from blue colored fondant and the duck’s hat was made from 2 different size and color fondant circles.

The cake was a huge hit at the party! I should note that it took 3 days to complete this cake. It’s one of those time consuming birthday cake designs. We spent the first two days practicing how to use fondant and the 3-D pan. On the actual night before the party it took us about 3 hours to complete the cake. 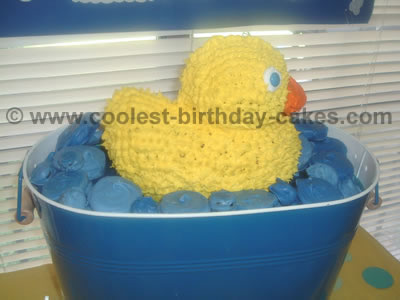 Rubber Ducky, You’re the One . . . to Make a First Birthday so much Fun!

Here’s how I made the Ducky Cake:

The cake was a huge hit and is one of those birthday cake designs that’s easy enough for a beginner to do! 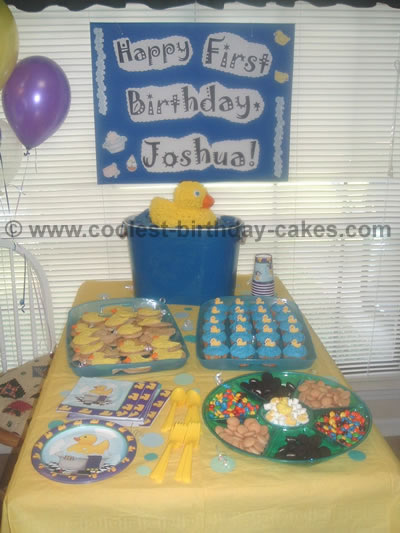 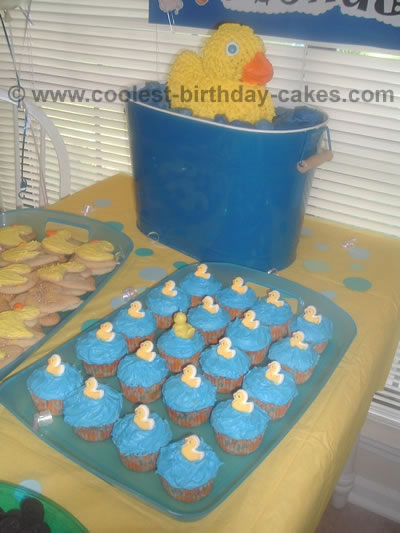 Ducks in a Pond Cake 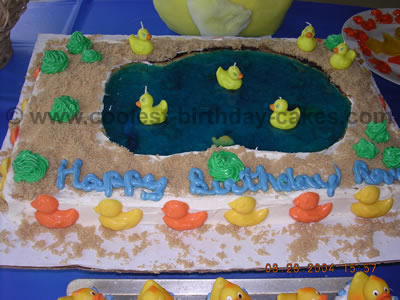 My 2 year old daughter loves ducks. Where do ducks live? In a duck pond. This is one of my favorite birthday cake designs. 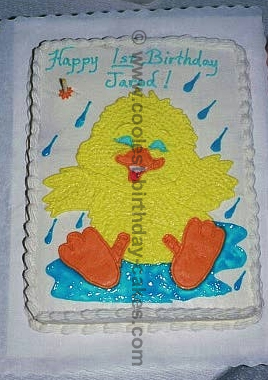 This was for my son’s first birthday. Because he has a thing for ducks, I thought it would be the perfect idea.

I found the duck in a coloring book and had my husband enlarge it on the copier at his work. After frosting the cake base white, I cut out the duck and placed it on the cake. Using a toothpick, I traced the outline around the duck. I then took the paper off and outlined the rest of the face and feet details with the toothpick. Once I had the picture fully traced on the cake, I was able to color it in with yellow, orange and blue frosting.

In conclusion, it was quite easy and I thought it came out great! 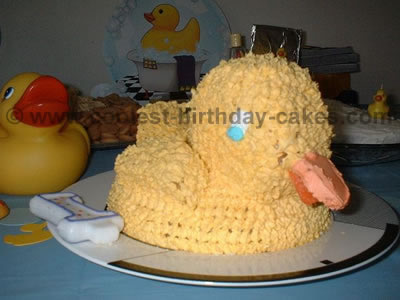 For my daughter’s 1st birthday, I decided on a duck theme and searched for cool birthday cake designs. “Duck” was the only word she knew and what to associate it with, so that’s what we did. I’ve never made a 3-D cake before and decided against buying a 3-D cake pan, because I wanted it to be more personal.

Searching online, I found many of the “building” ideas for duck birthday cake designs. So, I used a box lemon cake recipe, a large bowl for the body, two 10 oz. custard cups (cut flat) for the head, and one 6 oz. custard cup (cut flat and cut in half) for the wings. The tail was made out of leftovers from cutting the body flat. Then I used two orange gum drops (rolled flat and cut into triangles) for the beak. Toothpicks held it all together until it was time to eat. I used a homemade buttercream icing and colored it. I hand piped the duck with stars, and the wings/tail with pull out stars. The eyes and beak were iced flat.

I was worried that the cake would not look like a duck, so we put it to the test. My husband showed her the cake after it was finished (before refrigerating for the next day), and the only words out of her mouth were “duck, duck”. She absolutely loved it! It was very much the hit of the party. 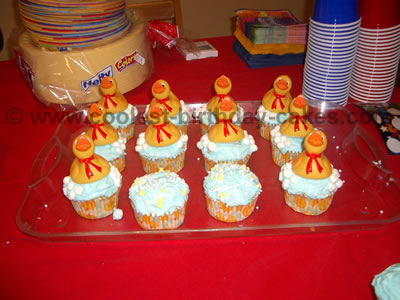 My daughter wanted a ducky party for her 2nd birthday. I made white cupcakes and decorated them with light blue icing made from white frosting with a little blue food coloring. Then to add the bubble effect. Also, I cut small white marshmallows in half and rolled them into little balls to put on the cupcakes. Finally, I topped them off with a little rubber ducky. They were such a hit and everyone got a ducky to take home with them. 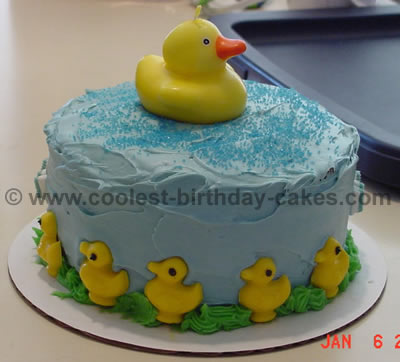 So, this was a cake for my son on his first birthday.

I baked a tall, round 5″ cake, frosted it blue and added grass on the bottom. Then, I used the “Happy 1st Birthday” lettering from the store around the rim of the cake. Finally, on the back, I used the leftover candy ducks that I made from a duck candy mold and placed a big duck candle on the top. 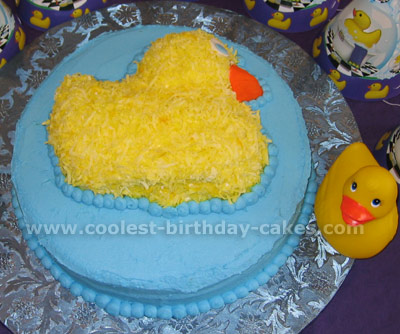 My son’s 1st birthday party theme was Rubber Ducky. I baked a single layer, 16″ chocolate cake with Bavarian cream filling for the base. Then I baked the 3D Duck (Wilton ‘s pan) using a yellow pound cake recipe. Unfortunately, the duck didn’t rise 100%, so I chopped him in half and laid him onto the 16″ round cake.

This was actually better in the end, since my son’s cake resembled the party favors that I made. For the duck’s birthday cake designs I used rolled fondant (beak and eye). I frosted the duck in plain white butter cream then topped with yellow tninted coconut.

For the favors, I bought Wilton ‘s baby blue candy melts, then I hand-dipped Oreos and topped them with a sugar candy rubber ducky.

Then I also made the Wilton Rubber Ducky chocolate candy molds, which was super simple to do. So, I bagged them up in cellophane bags and my husband printed off labels with a duck image on them. 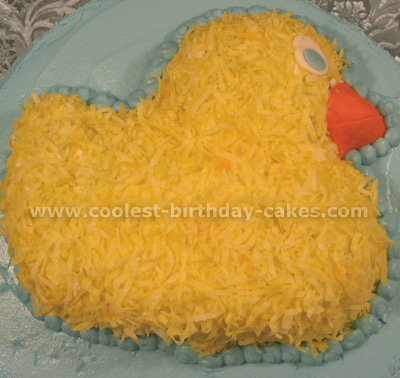 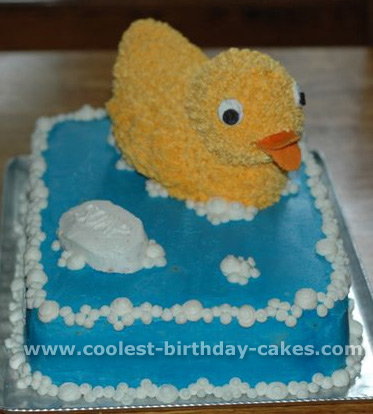 I made this cake for the baby shower of a friend of mine. I got the idea when I saw a ducky cake pan online, but I did not want to buy the pan, so I made my own duck.

The base is two layers from a 9×13″ pan. The soap is a rectangular piece of cake I cut out of the scraps I had from leveling the layers. Also, all of the frosting I used is butter cream.

For the duck’s body, I cut two ovals, stacked them, and shaved them into shape using a serrated knife. Then, I added a sloping triangle for the tail. In order to make the head, I did the same using a smaller circle. After filling the layers of the body and head, I used a skewer to attach them together and assembled the body. I then gave the duck a base layer of frosting.

For the beak, I cut two identical pieces from an index card (cereal box would do). The pieces were like isosceles triangles (the equidistant sides about twice as long as the base and curved out). I attached each piece separately to two connected (side by side) twist ties using a hot glue gun.

The twist ties ran the length of the beak pieces and stuck out the end. I then curved the pieces and glued together the two sets of twist ties that were sticking out of the back. The whole beak then got frosted in orange and stuck it into the head.

I used a star tip to decorate the duck and added another layer using more pressure to make the wings. Then, I made the duck’s eyes and the bubbles using a round tip.

I hope you enjoy my birthday cake designs! 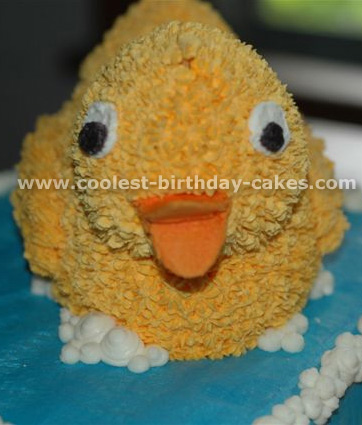