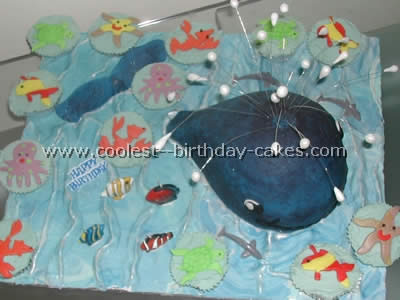 The cake is a firm chocolate cake which is easier to carve, frozen for 24 hours before cutting. I used a ball mould for the body. It is then covered in butter icing to help the fondant to stick. I used blue fondant icing and then stippled it with a large brush with black food coloring. Getting the tale to stand up was the hardest part. It is actually supported by cocktail sticks from underneath but with the icing forming the surrounding seas we managed to disguise that.

I used white icing with different shades of blue food coloring mixed in to get the marble effect for the sea, then runny white icing for the crests of the waves. The spout is floristry wire with small balls of fondant icing stuck to the top with shiny white powder.

I made this cake (with help from my husband, the engineer who thought up HOW I could make a Shamu whale cake) for my daughters 4th birthday. She is OBSESSED with Shamu; wants to be a Shamu trainer and so she wanted a Shamu whale party and cake.

This is one of the nice birthday cake ideas for kids there is. We made two 9×13 cakes. We used one as the base and frosted it with blue icing (we just kept mixing till it was such a pretty blue). Shamu the whale was harder. We found a picture from a coloring book she had and made a template. We used the remaining 9×13 cake and cut out Shamu from the cake.

We had enough cake to make 2 Shamus so one went on the cake and I made another for just Emma to eat. I then used my tips to properly decorate Shamu into his likeness. We simply placed him on the cake. We used blue and black glitter sprinkles to give the cake a glittery look. It was a hit! The hardest part was decorating Shamu right.

Thanks for all the great birthday cake ideas for kids on this site!

My son is really into sharks and whales, so for his 2nd birthday we had an under the water birthday party. His favorite whale is the humpback so we decided to make that for his cake.

I cooked three cakes from a cake mix and put each mix in a large loaf pan. I made another cake and split it up amongst the mini loaf pans (if you freeze the cake it is easier to cut and to decorate). Two of the loaf pans were the body and the other we used for the tail and head. We cut a little off the top in a U shape for the head and cut on an angle down for the tail.

The pectoral fins were made from 1 mini loaf pan cut in half lengthwise and then on one of the sides we cut at an angle to sit right up against the side. The hump was made from left over cake and the blowhole was icing. I then froze the cake so it would be easier to decorate. I just used the already made Betty Crocker cream cheese icing. I tinted the bottom with a little bit of black gel to make a light grey. Then from the left over light grey icing I put a little yellow for the eyes and barnacles (I didn’t want the yellow to be really bright).

The top I used lots of black gel to make it a dark grey but after it thawed out it had a tint of dark purple to it. I smeared the two colors together with my finger slightly to blend them together. Our sample was a plastic humpback whale we got at our Loonie store although I have seen them in the Oriental Trading Co. catalogue as well.

We had to put a support under the tail and as it thawed out we had to put one under the head as well (I just rolled up some tinfoil so it would blend in with the pan it sat on). It turned out pretty good and our son loved it too.

Enjoy your own birthday cake ideas for kids!

I just found a picture of a killer whale on the web and went from that. I made my own frosting out of 1/2 c. margarine, 1/2 c. Crisco, 3/4 bag powdered sugar and 1 tsp. vanilla, add milk to your consistency liking.

Here’s our Jonah and the Whale birthday cake idea!

Our son was fascinated with the Jonah bible story. So here is what we did!

With 3-D cakes it is easier to use box cakes utilizing the pound cake recipe. Call 1-800 customer service number if the recipe is not on the box- they will give it to you over the phone. Use an egg-shaped pan, purchased at a cake decorating store and a loaf pan for the tail portion. The egg bakes in halves, so just leave them staggered on top of one another. Use loaf pan to cut pieces for the tail. I used butter cream to frost the inside of the mouth to prepare a sticky surface for the fondant. Fondant can be purchased at cake decorating store (I used two pounds). It is white and I kneaded in the gel coloring (also specialty store). I used black and blue to get the dusky whale color. I reserved some fondant for the red tongue and mouth, and white teeth, spout, and eyes, and black in eyeballs.

You then roll out fondant. If you need to mend cracks or revive it because it dries out, add Crisco (not water!) to your hands and work it back together. Roll it out as thin as possible-instructions on packaging. Place in mouth the red fondant first. I placed a figure in the mouth from our nativity scene.

Frost the cake with butter cream so fondant will adhere.

*TIP* place pieces of waxed paper around base while you frost, protecting your presentation plate from drips of frosting. Lay out the fondant over the top of the frosted cake and smooth it down slowly with your hands, use a knife to cut where necessary. Cut other pieces of blue to fill in gaps on the whale’s body.

Take your time. Go slow – this is the hard part.

I rolled balls of white fondant and used toothpicks to stick into head. I rolled out fondant and curved around and inserted a shish-kabob stick into the fondant. Allow to dry and then insert into where the whale’s spout would be. Use icing as glue to adhere a rows of teeth to top and bottom of mouth, use knife to shape.

Remove the waxed paper. I then slathered blue colored “piping gel” (cake store) onto the board that the cake is sitting on, to look like water.

This is one of those extremely challenging birthday cake ideas for kids and it took me an entire day, while I was watching a 3 year old and an infant! It came out wonderful. The fondant even felt like whale skin, it was too cool!

This is one of the easier birthday cake ideas for kids. My son is a big fan of Free Willy; for his fifth birthday, I made him a whale cake using one of his toy whales. The cake was almond flavored with lemon filling.

Here are my birthday cake ideas for kids: I made this cake using the transfer method. First I traced some pictures of a killer whale, dolphins and other sea creatures onto wax paper.

After that I mixed two cake mixes and baked them in a sheet cake pan. While the cake was baking I mixed a recipe of Wilton’s butter cream frosting 1 c. softened butter, 1 c. Crisco, 2 tsp. Vanilla, 8 c. powdered sugar, and 2 tbs milk. I then mixed up all the colors.

After the cake cooled I frosted it and then placed it into the freezer. While it was in the freezer I outlined my template picture using black frosting.

I then placed the template onto the top of the cake and traced the pictures with a pencil so the frosting would transfer onto the hardened frosting.

After I lifted the wax paper template off, the design was on the cake. I then filled the pictures in with the appropriate colors using mostly the star tip. I added some seaweed, shells and then did the border.

If you want a streak of color in your border, turn your decorating bag inside out and use a paintbrush and color gel paint up the seam of the bag. Then fill with white frosting and squeeze onto foil until color is coming out nicely.

This cake was perfect for the sea life theme my daughter had picked for her sixth birthday. It was really fun to make to! I hope you find my birthday cake ideas for kids helpful.

A “Whale” of a 1st Birthday Cake