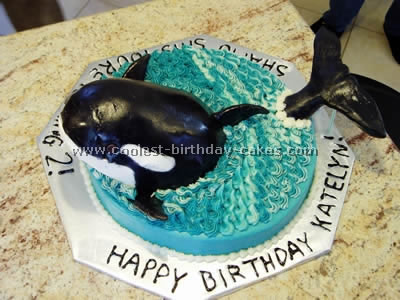 My niece wanted a Shamu cake for her birthday. I mentioned this to someone I know who told me that her friend made a killer whale cake for her sons’ birthdays and sent me a link to photos. The photos were amazing but I decided that I could do it! It required working with fondant which I’ve never done before but I love a new challenge!

Here’s how I did it: The base of the cake is a 12″ round (it would have been even better with an oval but I used what I had). It’s frosted with butter cream tinted with blue and just a hint of green for that turquoise water look. I put on a base coat of frosting in the blue and smoothed it. The whale’s head is made of marshmallow cereal treat that I formed into the right shape while still warm (but not hot). I frosted it in butter cream and then covered it in marshmallow fondant (made from a recipe that I found online and colored with black).

Because I’ve never worked with fondant before I’m not sure I got it quite the right consistency so there was some cracking but it looked great anyway. I cut away the fondant in the proper shape for the whale’s coloring and cut out holes where you see the white spots on the side. Then I smoothed out the white butter cream with a Viva paper towel where there was no fondant. I added bits of frosting where necessary to help the transition from black to white look clean and seamless.

I placed chocolate chips pointy side in for the eyes. (They’re hard to see, black on black but that’s how it is on the real whale). The whale’s tail and fins are made from molding the black fondant. The tail was molded around a wooden dowel so I could stick it in the cake. The tail needed either more time to dry out (I gave it a couple of days) or it needed to be not so thick and heavy. I ended up breaking it as I assembled the cake and it was held together with a toothpick. And then the tail was much much too heavy for the cake to support so it was held up by two pieces of plastic straw. (Moral: either make the tail much less massive or make it out of cereal treat and cover like the whale’s body). An added touch was to rub Crisco on all the fondant whale parts to make them look wet!

Next I took a frosting bag and striped it with white buttercream and filled it with the blue from the base cake. After placing the whale’s parts I piped on “waves” on the top portion of the cake around the whale and the white striping in the bag made the water look foamy. It was hard to keep the amount of white consistent but this ultimately ended up looking great on the cake! (In the end I ran out of blue frosting and used just white around the tail which I didn’t put on until delivered to the party site and that ended up looking great too).

If you’re going to make a cake like this one leave yourself lot’s of time. I made the fondant one day, the tail another day, the fins another day, the body form another and then completed the body another day. And that’s before I even baked the cake part! It was quite time consuming but fun and rewarding! My two-year-old niece loved it! She sat with her elbows on the counter staring at it for quite a while!

A “Whale” of a 1st Birthday Cake