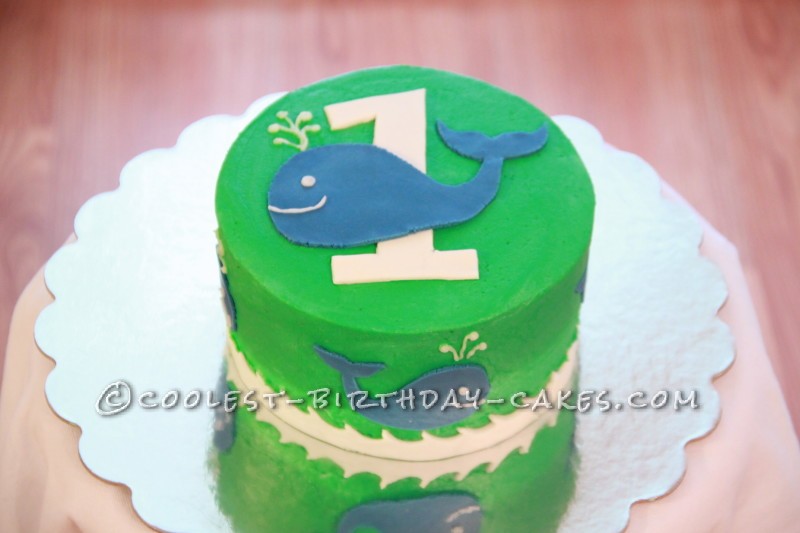 As I was shopping I ran into a A friend of mine. She said she was throwing her son a “Whale” themed Pool party for his 1st birthday. I saw the decorations she was purchasing in her shopping cart and they were adorable. However, someone in her family was making his cake. (That was fine. I am never offended if I am not asked to make a person’s cake) Well, less than a week before her son’s party, the person that was doing the cake became ill and my friend called me in a last minute panic! Of course I said I would do it.

I used a combination of green and blue food coloring get to come up witht he perfect seafoam green frosting to match the party decorations. After the cakes had cooled, I frosted the cake layers and assembled them for the 2 tier cake. I frosted the smash cake as well.

I found a whale clip art picture on the internet and printed it to the sizes I needed. (the small whales were 3″ by 2 1/2″ and the larger whales were around 5″ by 5″) I then traced the images onto wax paper and cut them out.

For the waves I rolled out long stips of white fondant. I used a large round piping tip and cut semi circles out of the top of the 1/2 fondant strip to make the waves. using water on the back side fo the fondant, I placed the strips around the bottom edge of the cake tiers.

The birthday boy had a “Whale” of birthday and had a “Whale” of time smashing into his cake! I love being a part of people’s celebrations! I feel honored that even if I am not in attendance personally, I’m there still “there”. 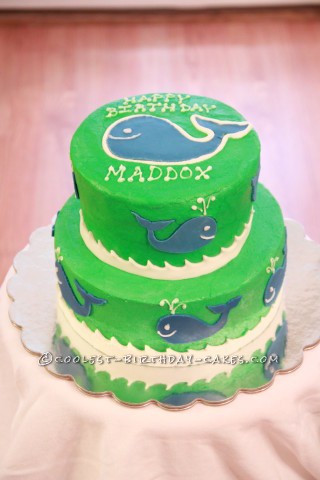