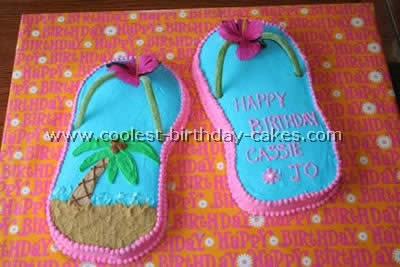 I made this cake for my friend’s daughter’s “Aloha” (backyard water fun) birthday. I got my birthday cake decorating ideas from this site. I made them from two 9×13 sheet cakes and froze them so shaping them would be easier. They were shaped into a left and right foot (I originally shaped them the same not thinking they had to be different directions so I had to flip one over).

Next I frosted them in the colors the birthday girl wanted, finished the edges with a piping tube and dots. I used graham crackers (or you can use the inexpensive bag of animal crackers) for the sand and put it into a ziploc baggie with the tip cut off for easy application.

I piped a palm tree on one cake and used the other for the birthday message. I found extra large sour green apple candy straws for the “over the toe” part. Then I stuck two silk hibiscuses from Lei I had at the toe. 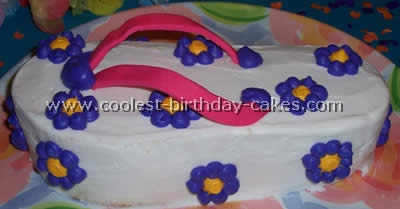 The flip flops are pound cakes cut in the shape of actual flip flops. I made a stencil from tracing around my daughter’s flip flop and transferring it to the cake made in a 9×13″ pan. I cut them out and iced them. The straps are made out of fondant that I molded to the straps on her flip flops.

Make sure you cover the strap with plastic wrap first if you plan on letting someone eat the straps later. Let the fondant dry completely so that they stay put when you place them on the flip flop. Hope you all like it. Hope it helps someone! Thanks for looking! 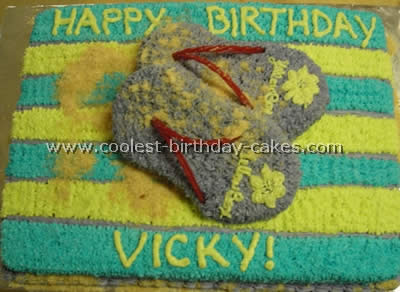 For this cake I baked a half sheet then two loaf pans (for the shoes). After I iced the sheet and made it look like a beach towel I cut the (frozen) loaf pans into the shape of flip flops. I angled them just so onto the sheet and then used licorice strips as the tongs. Also crushed vanilla wafers to add a sandy effect to the cake. After all was done I put the “yellow box” emblem on each flip flop. The recipient absolutely adored these birthday cake decorating ideas and the thought put behind it. 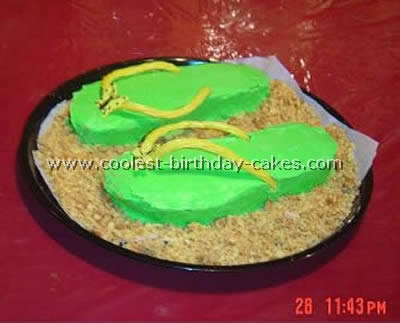 I took a brand new pair of flip flops and traced the shape onto poster board paper. I cut it out and placed my template over a sheet cake. Cut with a sharp serrated knife around the stencil. Flipped over the template and did the same thing on another sheet cake (making left and right shoes). I did one chocolate and one vanilla.

Then for my birthday cake decorating ideas I used GEL food coloring and colored white frosting green. Covered both “shoes” completely (if you do a thin layer then put in the fridge for 15-20 min to get chilled, you can make a smoother top coating). I used four Twizzlers to make the straps (two on each) and plastic flour for design. 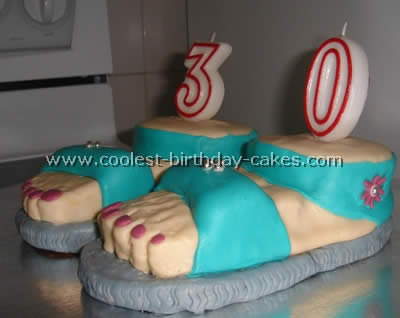 I got these birthday cake decorating ideas when my sister complained just before her 30th that she couldn’t find a pair of walking sandals that she liked. I wanted to work more with fondant so I decided to make her a pair! I baked two small oval cakes, shaped them out and covered with fondant. It was like playing with play-doh! Just make sure the fondant is at least 1/4″ think or else it tends to split easily. 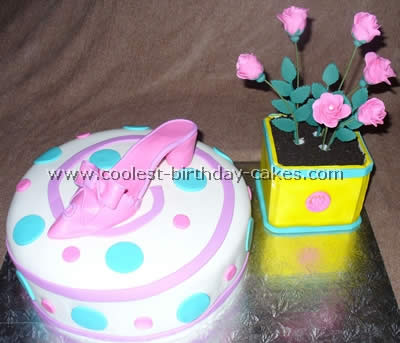 This cake was for my wife’s birthday. The birthday cake decorating ideas I took from two of her favorite things, shoes and flowers, so that’s what inspired me to do this cake. 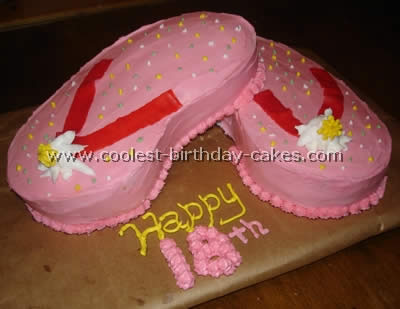 I made this cake for my sister’s 18th Birthday. I got some birthday cake decorating ideas on this web. I used a Wilton 12″x 18″ sheet pan with three boxes of yellow cake mix. After I froze the cake for two hours I cut out a flip flop shape from each half of the sheet pan. I then arranged them on a cutting board and placed a small chunk of cake under the top shoe for support.

I frosted this cake with frosting I purchased from the bakery at my local grocery store (around four pounds). It is one less thing I have to worry about and their frosting is so yummy. 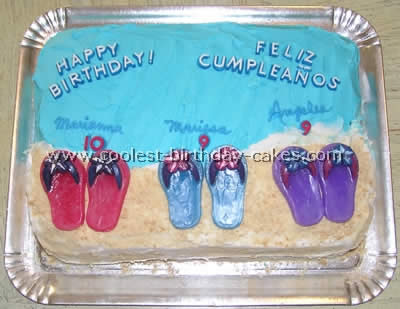 For my daughter’s 9th birthday she wanted her party at a water park. Many of the party favors we picked out (from Oriental Traders) had flip-flops so my birthday cake decorating ideas was to make flip-flop cakes. Because she shared her party with two friends I made two cakes.

For the first cake I used one cake mix in two 9″ round pans. Frosted the cake with white Wilton buttercream (I also used this for filling) and tinted some of the white frosting a blue color for the flip-flops and trim. Then I outlined a flip-flip shape onto the top of the cake and filled in with blue and piped blue stars around base of cake. For the straps I used teal cording and placed flowers punched out of foam with a jewel on top. I used some of the leftover flip-flop erasers (Oriental Traders) from the goody bags for added effect. 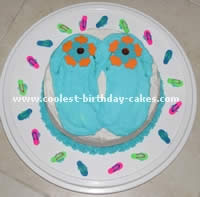 For the second cake I made two half-sheet cakes, used jam as a filling and frosted bottom half with white Wilton buttercream frosting and top half with blue, making a jagged edge to resemble the water receding from the beach. I then used crushed “Maria” cookies (use any kind you like) for the “sand”. I left a thin band of white showing so that it looked like sea foam. The three sets of flip-flops (representing each girl) are candles from Oriental Traders and I used candied letters and numbers for the HAPPY BIRTHDAY FELIZ CUMPLEANOS and the girls’ ages. I just piped their names with some of the blue frosting darkened with a bit more blue.

To make the invitations I scanned four different colors the cellophane hibiscus-print party bags (Oriental Traders) we used for the party favors. I then imported these images into my Create-a-card program as backgrounds and made them less opaque and printed onto cardstock. Using a hand drawn flip-flop template I took rough measurements and made two text boxes one for each shoe. 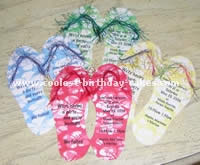 I then added all the information and printed a rough-draft of the text and matched it up to the cut-out template I had drawn until I could fit all the text into each shoe properly leaving enough space at the top for the straps. I then printed out several invitations onto the background pages I had previously printed, traced the template onto the printed out sheets and cut out. I used fun fur in coordinating colors for the straps. The girls loved the invitations and the cakes – my birthday cake decoration ideas were a success. What a great party! 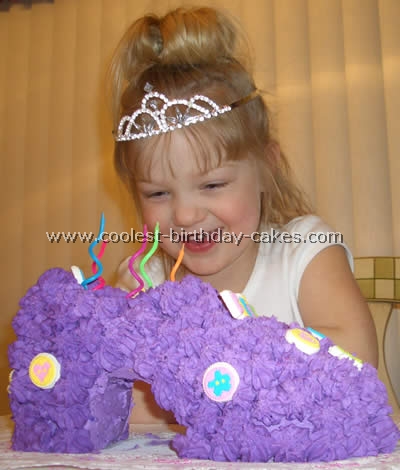 This shoe was for our five-year-old daughter who believes she is a princess. We purchased a frozen pound cake for this one as it requires a lot of carving. I wish I could tell you how it was carved but that is my husband’s department which, by the way, he found on this site for birthday cake decorating ideas. The icing was home-made butter cream and then we tinted it purple and I piped stars all over it. Hint: put icing underneath before icing the rest. We didn’t and it was nearly impossible to get underneath without messing up the top of the shoe.

We purchased candy to decorate it and sprinkles to go over the top. She had a “Glamour Girl” theme and wore her dress and high heel shoes to the party along with her tiara. She loved it and still talks about her birthday day cake!