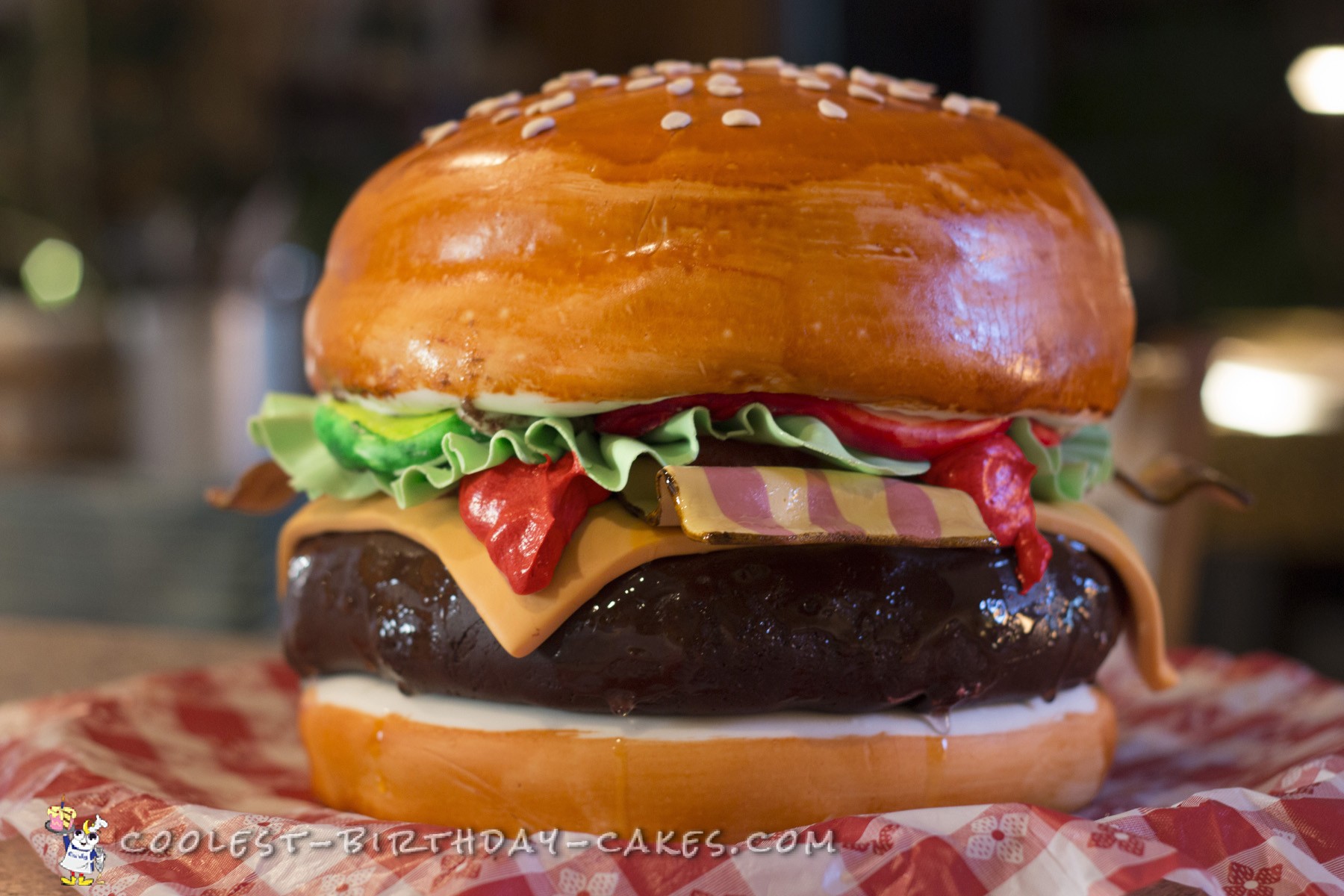 Here’s a burger cake I made for my daughter and her boyfriend’s birthdays (5 days apart). We were invited to their birthday/camping party at his parent’s house in the desert. I said I’d bring the cake. I worked on it over several days. First, I baked two 8 inch white cakes, (for the buns) and two 8 inch chocolate cakes (1 for the meat patty). Then, I cut the humps off both the chocolate cakes and one of the white cakes, (and ate those, lol) and left one with the hump to form the top of bun. Next, I wrapped them up and froze them.

Another day I made a bunch of homemade marshmallow fondant. The next day I made the toppings. The day before the party, I intended to get up early, thaw out the cakes, and decorate, but it didn’t quite turn out that way. I got up early alright, only to find that our kitty had gotten into a cat fight, had a swollen paw and was limping. Off to the vet we go. So after $250 and half the day later, I give poor kitty her medicine and tuck her into bed, and start decorating the cake.

I spread buttercream on top of one of the chocolate cakes and put the white cake with the hump on it, this made my top “bun” a little taller. After icing the “bun” with buttercream I covered them with white homemade marshmallow fondant. I then mixed some tan, yellow and brown gel food coloring with a bit of vodka and painted the outsides of the buns, then sprinkled the “sesame seeds” on top while it was still wet (so that they stuck).

For the “meat” I wanted the patty to look bumpy, so I iced it with chocolate buttercream then stuck Coco Krispie cereal all over it before covering it in chocolate fondant.

I had made lettuce with green flower paste kind of thinned it out and ruffled it up and let it dry hard.

I also made bacon out of flower paste. Fist, I colored half kind of a brownish tan color, and the other half with a kind of brownish red color. Then, I made rope shapes out of them, but made them kind of uneven widths. I laid them out next to each other, (tan, red, tan, red), then flattened them out with a rolling pin. Finally, I laid the strips to dry over fat straws to get the wave shapes.

I colored a little bit of flower paste a light tan, and made sesame seeds by rolling tiny balls and squishing one end with my fingers and let them dry.

I made a tomato slice out of kind of pink fondant, then painted the “skin” of the tomato with red food coloring; I dribbled some corn syrup onto the parts to make it look juicy.

I made pickles out of bright green fondant, and painted the skins with dark green food coloring.

For the red onion, I rolled out a strip of white fondant and mixed food coloring to make a kind of violet/purple color and painted it, then rolled it up.

For the cheese I colored fondant orange and cut out a square and laid that on the “patty”.

I colored some buttercream red for ketchup. I spread the “ketchup” on the bottom bun and placed the “patty” on top.

So, I decided I’d put it all together at the party. (I wasn’t about to drive 2 hours into the desert with a stacked cake.) I put the bottom half of the “burger” in one box, and the top “bun” in another. The sugar paste lettuce and bacon were in their own box, and the fondant pickles, tomato and onion were in another. I packed another box with some cake tools and the red buttercream “ketchup”. We packed up the car with all our camping gear and cake stuff and headed out to the desert.

After driving for one hour, I realize, I had FORGOTTEN the box of fondant toppings in the kitchen! My hubby refused to turn around and get them (“I’m not about to make this a 4 hour trip!” Lol, I don’t blame him; it was silly for even asking…)

Anyway, we arrive to the house in the desert in 105 degree heat. (One good thing about not stacking ahead of time; was if I had, I’m sure the buttercream would have melted and the whole thing probably would have slid over…) I was telling the host that I had forgotten the toppings, when a girl walked in carrying a bag of giant marshmallows for s’mores. I asked if I could have some, the host said she had some powdered sugar and luckily I was able to make some fondant right there and recreate the toppings.

I stacked the burger cake and all the toppings, squirted the red buttercream “ketchup” here and there and painted some corn syrup on the “patty” and the “bacon” to make them look juicy.
People didn’t realize it was a cake; one guy thought it was a cookie jar and tried to take the top off, lol! The host said it was the highlight of the whole party.