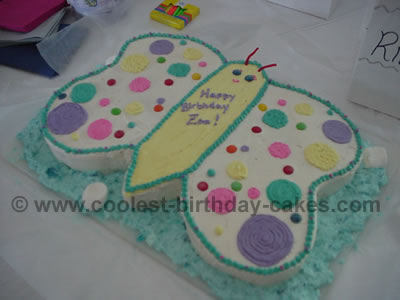 My daughter wanted a butterfly cake for her 2nd birthday. I made 3 white sheetcakes and just cut them out in butterfly shapes. I frosted the entire thing in white icing and then the decorating began. I used small M&M’s for the eyes and some of the dots. For the larger dots I used the writing utensil with a bag of icing and made swirlies! Red licorice pieces were used for the antennae.

A Butterfly cake pan was used. I made homemade icing (recipe below), used icing color for the brilliant colors. I used a cake decorating bag with the star-like shape to make the dots on the cake to frost it. M&M’s were used for decoration, also.

This cake was made for my daughter’s 1st Birthday. We had a butterfly theme.

I used a chocolate cake mix from a box. I baked it in one round pan. I cut the wings out of that and then used Twinkies to build the body.

I then frosted the butterfly cake with homemade buttercream frosting. I tinted it light green (with food coloring) for the wings, and blue for the body. I just made assorted colors of frosting to create accents. I also used assorted sprinkles for more color affects.

I used a toothpick to blend some colors together, and I used piping bags (homemade out of parchment paper) to draw lines, etc.

This cake was made using two heart shaped pans. I used one cake mix and separated it evenly between the two pans. The body of the butterfly is two Twinkies placed end-to-end. I then outlined the wing markings with icing and iced the rest of the cake using a buttercream icing. The wing markings are filled in with the same buttercream icing that I thinned with a few drops of water and placed in the microwave for a few seconds so that it would be runny. Pipe on a few details and you’re finished making this cool butterfly cake!

Cake by Ivy P., Hammond, IN

This cake is actually made out of cupcakes. I pushed them all together and ice the top. For each color on the wings I used food color spray, then put colored sprinkles on each section. This butterfly cake was made for my daughter’s birthday party at a pottery place. It’s easier than cutting a cake.

I made these two cakes for my daughters Kindergarten class. They had just learned about butterflies. You make a 9 inch round cake (whatever flavor you like). You cut it in half. You take one Twinkie and place in the middle of the platter. You then take one half of the cake and place it next to the Twinkie, the rounded side of the cake touching the Twinkie. Take the other half and place on the other side.

Ice and decorate the butterfly cake to your desire. I used white fluffy icing, gel icing for outline of wing designs, the spray icing for all over color, skittles for the wings. For the antennas I used Twizzlers twisted rope. The children loved it.

Cake by Miranda B., Manama, Bahrain

This cake is quite easy to prepare, I got the idea from a book. I bought a 30 cm rectangle cake tin, used 3 packets of cake mix baked in the oven according to packet instructions.

Once the cake cooled I drew a stencil of the butterfly, placed it on top of the cake, and cut around the stencil. Then I made all the icing, mixed each one according to colours. I used lolly-pops for the bottom, pipe cleaner for antenna’s and star candies.

Cake by Jolee S., Charlottesville, IN

I made this cake for a friend’s baby shower. I used pipe cleaners for the antennas.

Read Ginger’s “Party-Tale”: The story behind the cake…