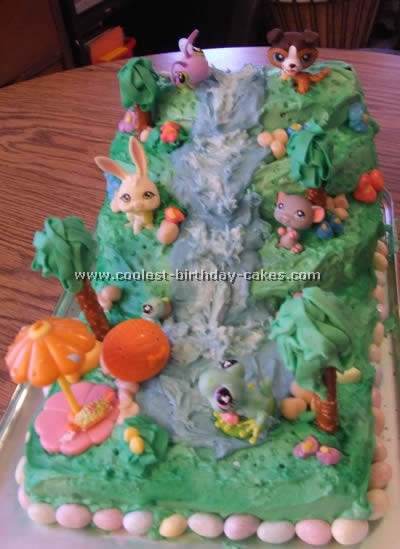 My niece wanted a Littlest Pet Shop cake with a waterfall. I have no idea in cake designs so began by baking a 9×13 cake and two round 9″ cakes. I made butter frosting and colored some of it green and some blue. I also left some out so I could make the waves in the waterfall. I just hardly stirred blue dye into the white to give it that look. To make the mountain I placed a round cake on top of the 9×13 but I placed it so that only 3/4 of the cake was on it. I cut the other 1/4 off so it was flush with the 9×13. I then took the other round cake and placed it so only 1/2 the cake was on then I took the 1/4 cake that was left from the first and placed that so it was on top and looked like steps. I made sure that the pack was all flush. I put a couple chopsticks in (that’s all I had) just to make sure the top layers wouldn’t tip off.

Then I frosted the river, first with just blue frosting, and then I frosted the rest of the cake green. I made the waves with the partially blended blue frosting. I bought some green spray and I sprayed that on so that it gave the green a more real look with different green grass. I also had some fondant that I made myself with a cornstarch recipe (which I do not really like too much). But I rolled little rocks and different colored flowers and placed them all over. I made the trees with pretzel rods and green frosting by piping the frosting on the tip of the pretzel.

I was amazed how easy it really was and they dried and stayed just like that. Then I placed the Pet Shop toys on. And lastly I placed jelly beans around the bottom to give it a finished off look. It took about four hours including baking the cakes. And my niece and her friends loved it. Not only did it look awesome but tasted great with the butter frosting. Now I have all these parents wanting me to make cake designs for their kids.

I started by baking two sheet cakes. One I used for the base cake and the other I cut in half and stacked on one end of the base cake. I cut a shallow river down the middle and at the base a shallow lagoon. I frosted the majority of the cake green and then decorated it with green grass bushes and tropical flowers. I decorated it with rocks and some palm trees made out of pretzel rods and royal icing palms. I did the water by frosting it with white frosting and spraying Wilton blue spray to make it look like water. My daughter was so amazed by this cake. She said “It looks like the water is moving!”

This cake was for my daughter’s 6th birthday party. She wanted a hula/luau theme and was set on a waterfall cake. I searched for unique cake designs and this is what I finally ended up with. The cake was made with a 4 layer cake made from 12, 10, 8 and 6 inch cake pans. I layered the levels and used skewers to help stabilize it.

First I gave it a base frosting of white buttercream and let it refrigerate overnight. Next I added the grass around the edges of each level. I marked off a section for the waterfall with a skewer and did that next. I used two blues in one bag. A light blue and dark blue and put each one on one side of the bag then squeezed it together and then used just a round tip. I did a swirl pattern down the cake for the waterfall. I then used blue and white sanding crystals to give the waterfall a shimmering look.

Next I added the “sand”. I crushed up graham crackers and mixed it with sanding sugar and sprinkled it on top of each layer. At the bottom I put some buttercream around the edges of the cake and sprinkled sand there as well. I added some pink flowers around the cake for color.

Next I did the hut. I took a plastic but and cut off the top part. I used a flat tip and made the shingles. For the roof I used a round tip to do a base then a smaller tip to do the “twig” look. I added the plastic figures and some candy shells made from a mold and it was finished.

The candles are the large flowers going down the front of the cake. It was a HUGE hit at the party. My daughter loved our creation. Good luck with your own cake designs.