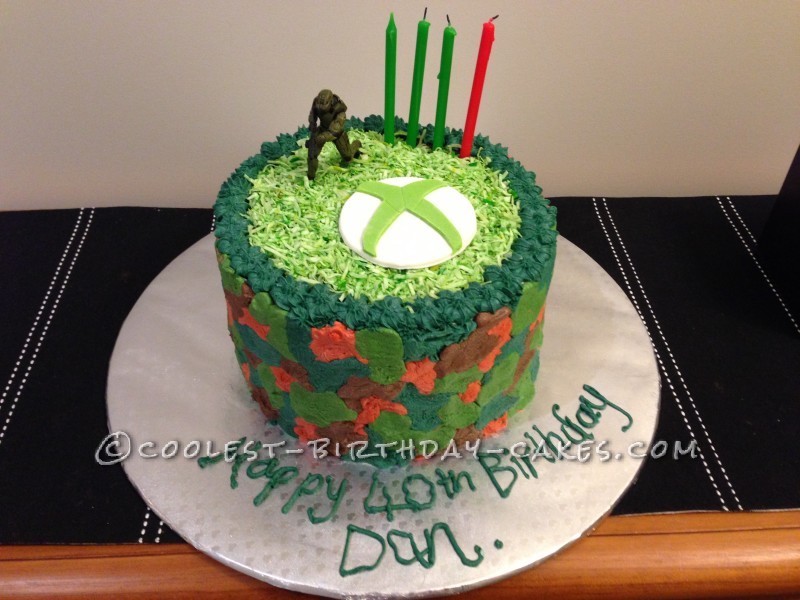 My husband enjoys playing on his X-Box One, so I decided that that would be his cake theme for his 40th birthday. I baked 3 round chocolate cakes, leveled the tops when cooled, then stacked them with a chocolate ganache and berry jam in between the layers. Next I crumb coated the stack, then piped on … Read more 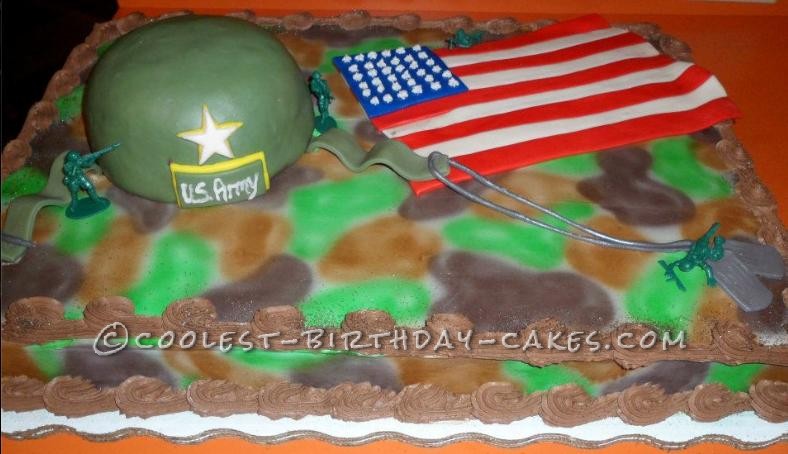 My cousin was leaving for the Army so I made him an army helmet cake. This is a full sheet cake iced and sprayed to look like camouflage. The army hat is rice krispy treats formed into a hat and covered in army green fondant. I made the straps out of fondant and placed them on … Read more 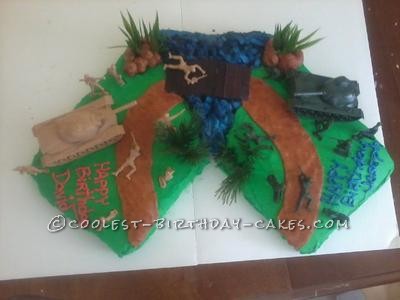 So when you have twins, how do you make sure they both get their own cake?? They decided they wanted army men. So while looking for ideas at toy stores we found a box of tan and green army men with extras like plants and tanks. So I started by making two 11×17 cakes. I cut the … Read more 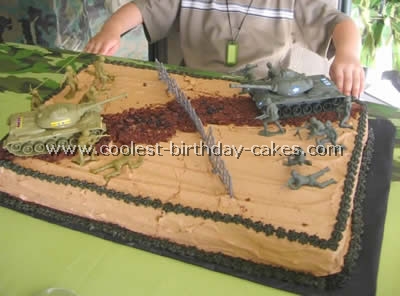 This was my first homemade birthday cake. The hardest part was trying to get just the right color puke green icing. The toys were from the dollar store and the dirt trail was the crumb layer off the bottom of the pan with a little bit of chocolate chips mixed in as rocks. He loved … Read more 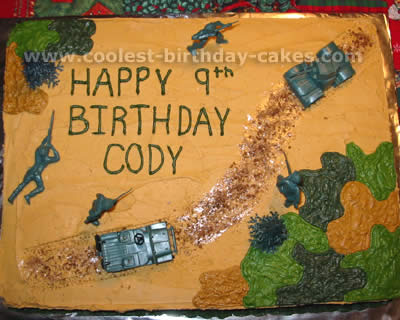 This is made using a 11x15x2-inch cake pan. There was plenty of room on top for those green army men! It was really simple to make and a favorite for the nine year olds who ate it! 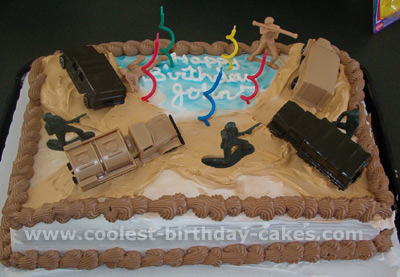 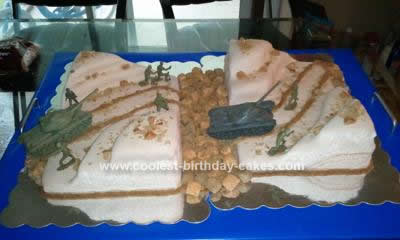 I was asked to make a cake for a friend’s son who was going into the Army. He is going in as infantry and headed to the desert once he has completed his training. I felt like I should do something that would be good enough for a young adult as well as the adults … Read more 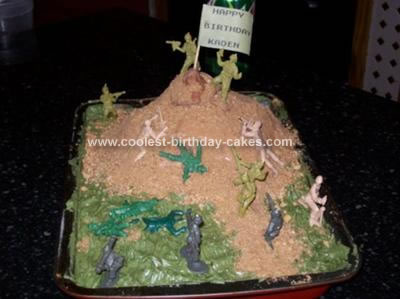 For my son’s sixth birthday he wanted an army party. He also wanted to help make his cake so we did and it was a lot of fun. We started out with a regular chocolate cake mix and a 9×13 cake pan. We put most of the batter in the pan but then I had … Read more 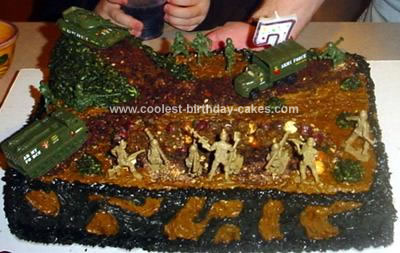 I am not a baker at all, in fact my cakes usually fall apart. However, I decided to try my hand at decorator cakes for the first time this fall for my oldest and youngest sons’ birthdays, (each of their cakes are on this website) so my middle son was of course expecting the same … Read more 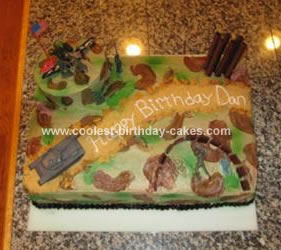 My little brother wanted an army theme for his birthday, but rather than recreate the Korean War (which he actually asked me to do), I figured a Army Battlefield Cake would suffice. I used two sheet cakes stacked on top of one another with a layer of frosting in between. I also used a small … Read more 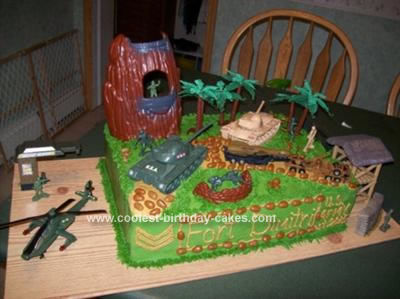 My son wanted an Army Scene Birthday Cake for his fourth birthday. I made two 11×15 cakes, filled and frosted. With that done I took some of his army guys and toy figures and created a fighting scene on the top of the cake. I also added a helicopter pad and a watch station on … Read more 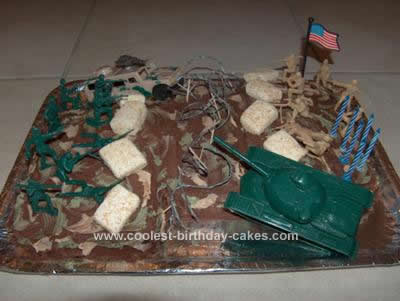 My wife made a Battlefield Birthday Cake Design for my son’s 7th birthday. Photo enclosed. I was “helping” with the decorating, giving technical advice, etc, and struck upon this idea for one of the cupcakes. It’s a little gross, but then again war is not for the weak of heart! The larger cake was made … Read more 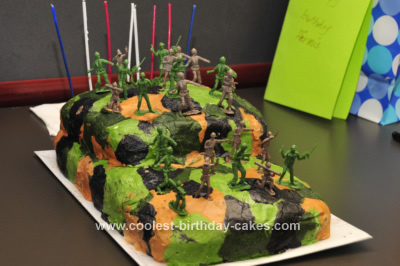 I wanted to try to make a camouflage cake for my son’s 8th birthday party and it was actually some of the cakes from THIS SITE that convinced me I might be able to pull it off, even though I’ve never considered myself to be much of a cake decorator! Although some of the batter … Read more 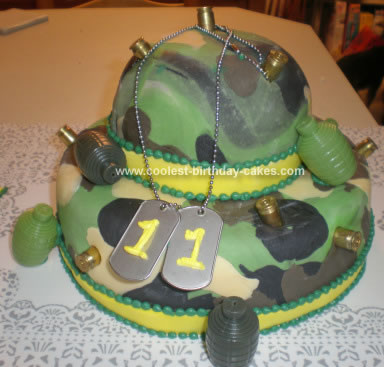 I had never done camouflage fondant before, so I researched methods of creating it and decided upon rolling out a base color(military green)then adding small amounts of flesh color, brown and black fondant pieces and rolling them out on top of the base green fondant. I used two 8 inch cake pans and a Pyrex … Read more 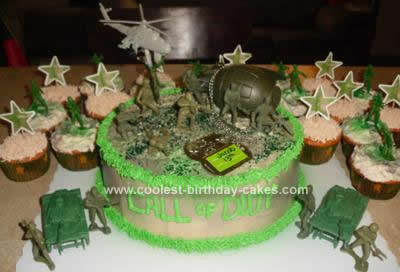 I made this Homemade Call of Duty Cake for my nephew Jacob’s birthday. He is always playing the game on his ps3. I bought a couple packs of army men and tanks. The garnade actually works when you squeeze the trigger. And it being an army type cake I had to use dog tags. I … Read more 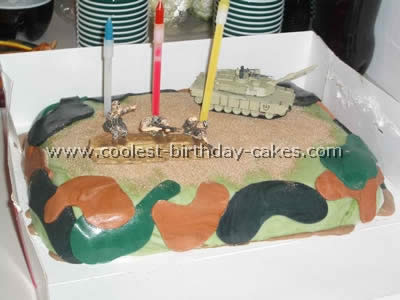 We went with an Army theme for my sons 3rd birthday this year. My husband was a helicopter pilot in the Army so my son is fascinated with that. I got the idea for the cake as I was searching for cake decorating and designs for Army-themed parties. There was a picture of a similar … Read more 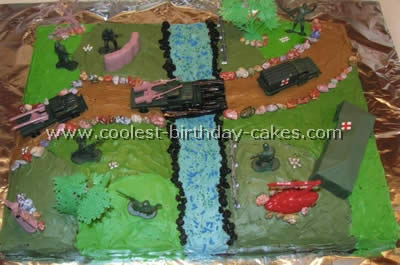 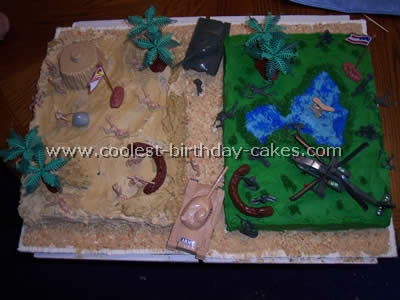 My husband is in the US Army and our son just idolizes him so for his 8th birthday party he wanted an army cake. We were having a huge party so the cake decorating and designs needed to be a good size. I baked 2 large sheet cakes. I made butter cream icing. I bought … Read more 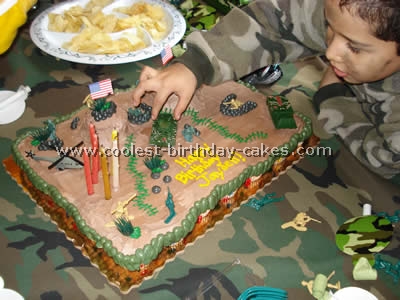 This is a cupcake cake with an army theme. My son so much enjoyed the cake decoration and designs for this great day.