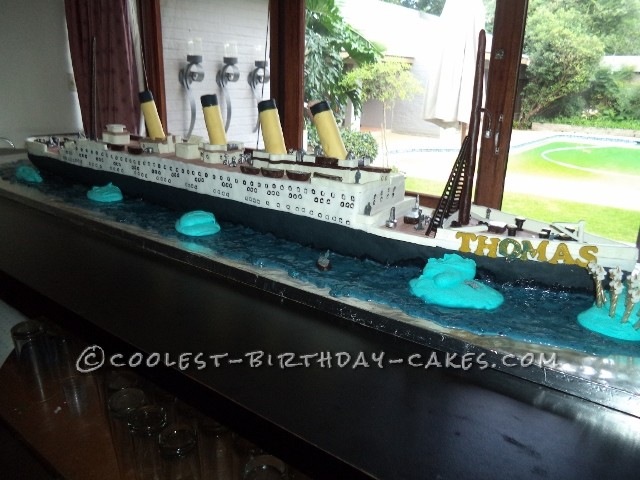 Tom is a little gifted boy with an intense interest in the Titanic.  He is in my son’s class, so when we got the birthday invitation, it clearly stated the theme was the Titanic.  Tom’s mom said that he will have to settle for a cake with a picture of the Titanic on it.  Knowing … Read more 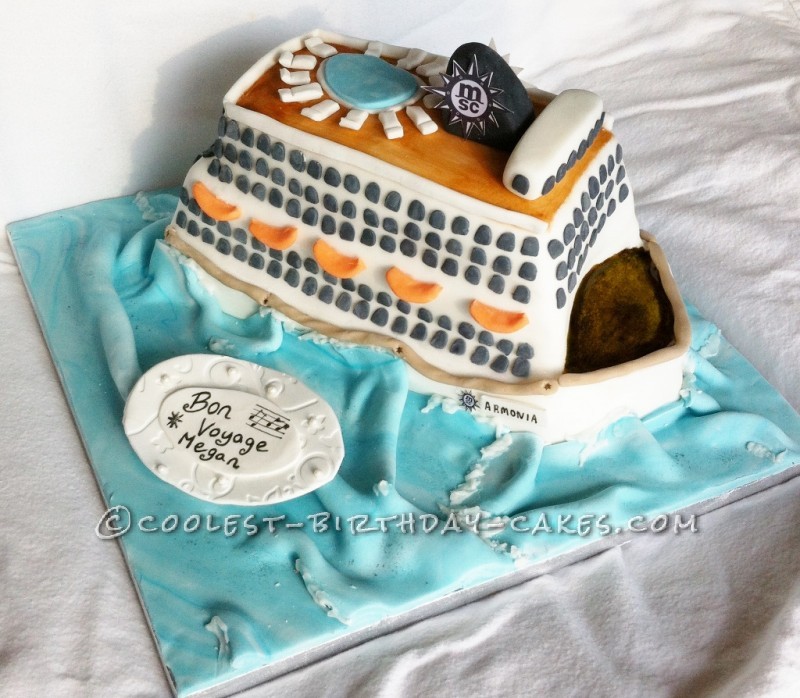 I was so excited when I was asked to make this ship birthday cake. I’d never made anything like this before, this was for a young lady who works at my hairdressers who was leaving to work on a cruise ship. I made an A4 size cake in vanilla sponge. I had previously made some … Read more 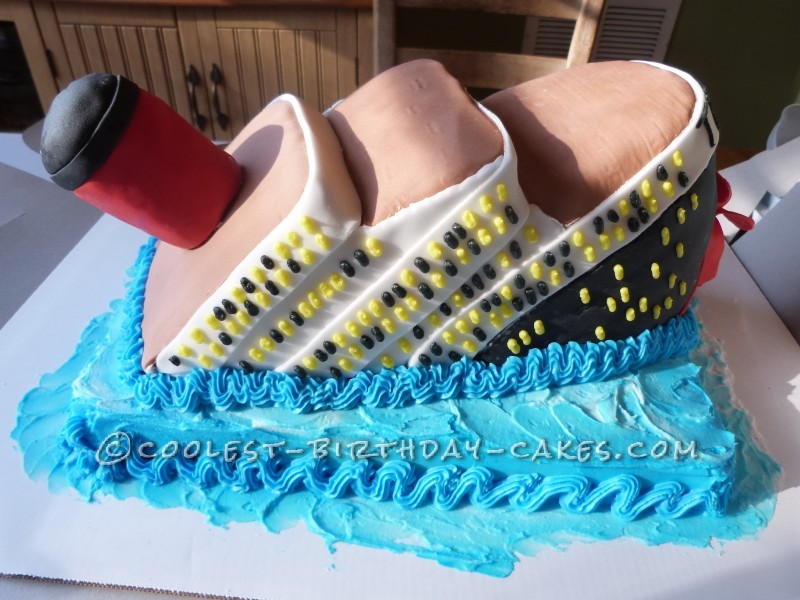 I made this Titanic cake for my friend’s 9-year-old son for his birthday. He has a fascination with the Titanic. The bottom is just a 9″X13″ yellow cake covered in blue butter cream frosting. For the ship, I made 2 batches of crispy rice treats and formed them into a pile to let them cool a little … Read more 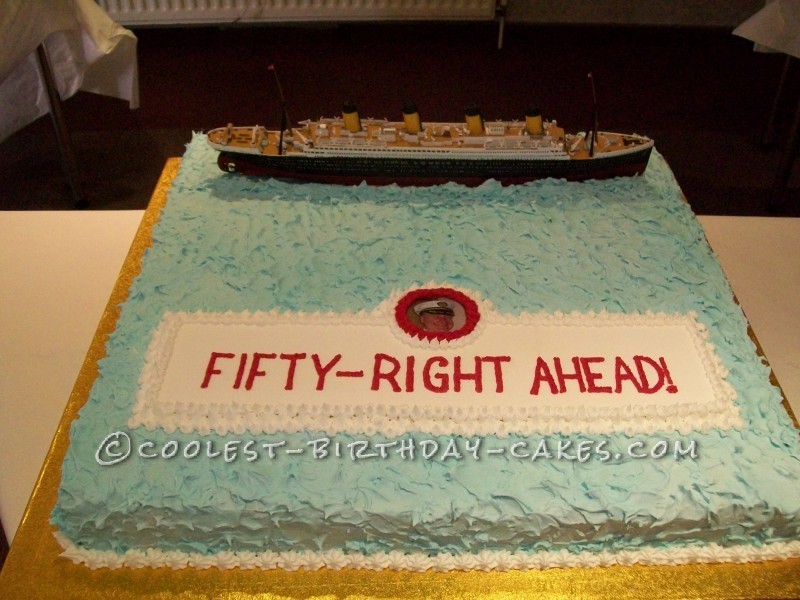 This  Titanic birthday cake was made as rich fruit cakes but with gluten-free flour. It was made 3 months before the required date and “fed” once every two weeks with brandy. Then marzipaned and decorated. This was made for the husband of a friend. He is a “Ttitanic” enthusiast and the model of the Titanic was … Read more 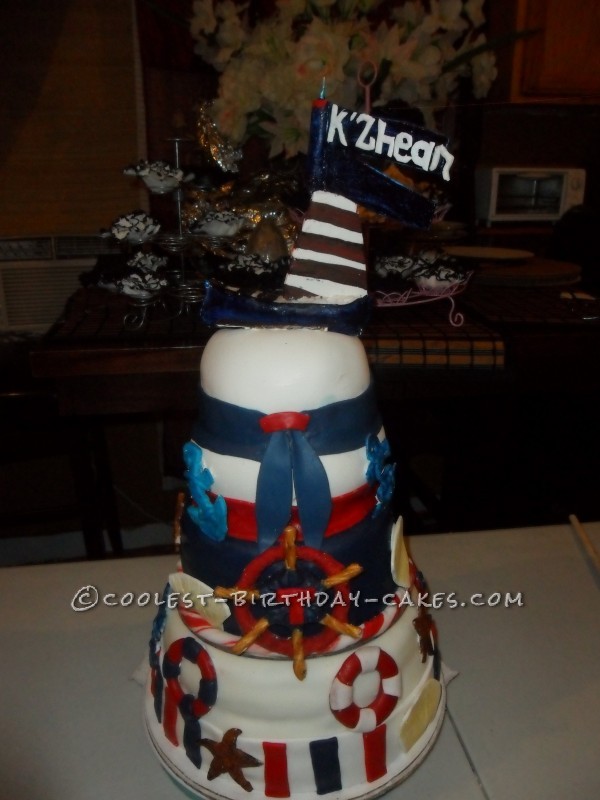 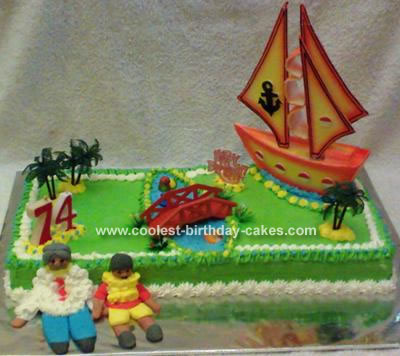 My daddy turns 74 last month. I wanted to give him a surprise birthday day, not just a plain ordinary cake, I wanted to make one cute and wonderful cake for him. Then, I got this idea for a boat cake: a wide cake with sailboat on it. My daddy used to be a sailor, … Read more 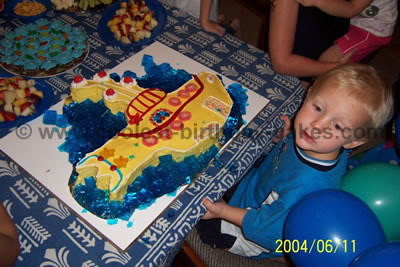 My son who is turning three requested a Yellow Submarine party. What a challenge! (We are coaching him so that he will request a more traditional theme for #4.) For the Yellow Submarine & Jello cake, I baked a triple batch of white cake (easier to frost with a light color) in a HUGE round … Read more 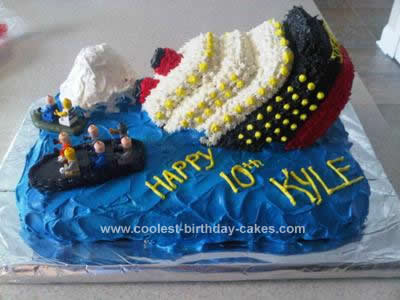 I enjoy making homemade cakes for my children, nephew, neighbors, friends etc. I have made several character cakes and last year a tank cake for my son’s 6th. This year, my nephew challenged me by requesting a Homemade Sinking Titanic Cake, when it was sinking! As I stood there expressionless in front of him, I … Read more 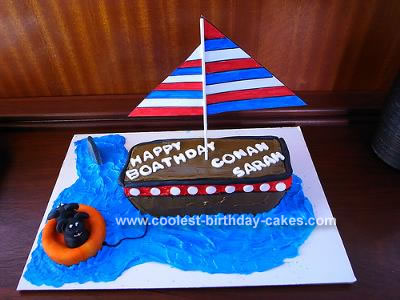 I baked a circle cake, cut in half then stood them on their sides and put some rods in the center to hold them together. Worked pretty well, I was just making it up as I went along. The sail of the boat cake was just paper and the boat was chocolate cake with orange … Read more 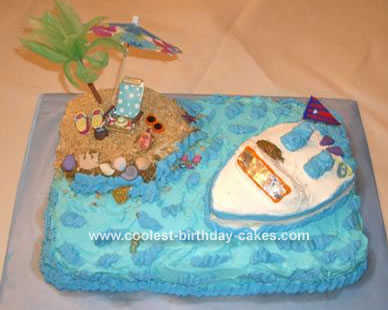 I made this boat cake for my husband’s birthday. He really enjoys boating and I enjoy laying around in the sun, plus I wanted to make something unique looking. This cake design requires normal cake pans( 9×13& small square or round pan) and one small Pyrex bowl. You will need 2 cake mixes , 1 … Read more 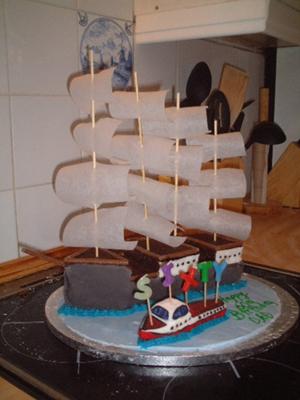 I used two long loaf tins to make a chocolate sandwich cake and created the hull by cutting two corners off to create a point. The first cake was the base and the second was used for the raised decking. I then iced the sailing ship cake as normal. I used mint matchsticks to create … Read more 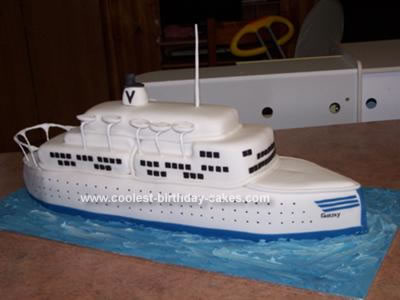 This ship cake was made by me (July 09) for my mum’s family celebration. 50 years ago (1959) my mum and her family made the voyage from England to Australia to live. They came out here on a boat called the Fairsky, so using pictures of the Fairsky ship I made a cake that looked … Read more 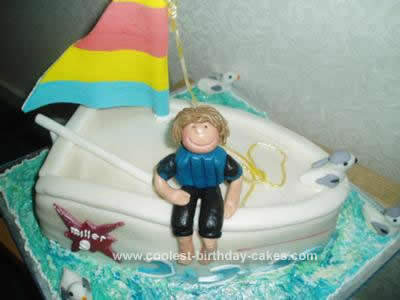 I made this Homemade Sailing Ship Birthday Cake for my grandson Miller, for his 9th birthday. The cake was made in a loaf tin, split and filled with jam and white chocolate buttercream, and crumb coated in vanilla buttercream, then fondant iced. I modeled the boy and birds in sugarpaste, also the sail. The mast … Read more 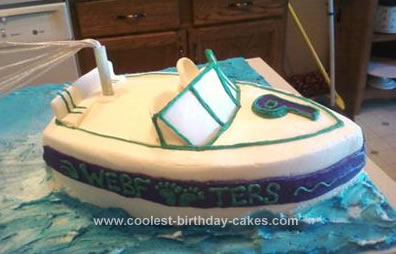 I made this ski boat cake out of a half sheet cake, cut it in half, glued it together with butter cream frosting and then shaped it. I used fondant pieces to make the boat details. The figurines were made out of dolls and arms reglued into the position they needed to be. Strings were … Read more 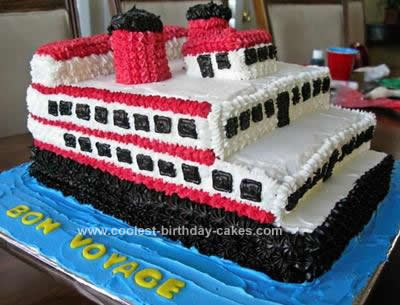 This Homemade Riverboat Cake was made for a retirement party, after the Barefoot Princess was sold to new owners. I did my best to make the cake look as much like the real boat as I could, and learned a lot from the process. I used three 9×13 inch cake pans, baked different flavors…chocolate, yellow … Read more 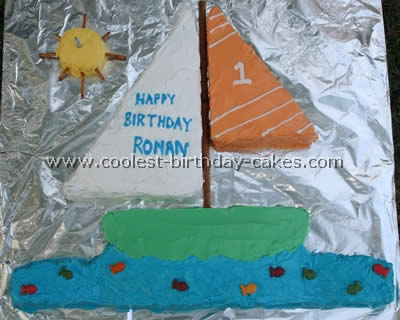 We did Ronans birth announcements with a sailboat on the cover so I thought a sailboat cake for his first birthday would be fun. I couldn’t find what I had in mind so I took my rectangular cake pan and made a template out of cardboard. I used two rectangular 13 X 9” cake pans … Read more 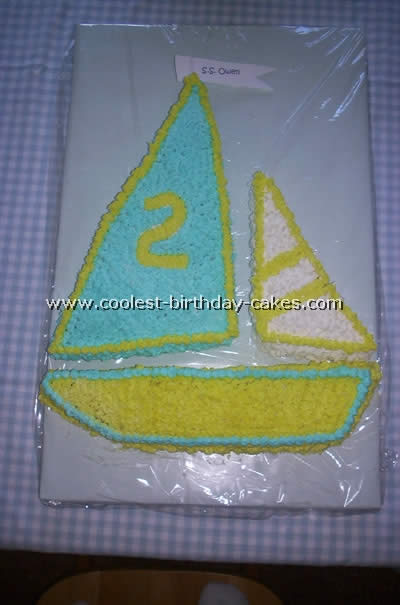 This sailboat cake was for my son Owens second birthday. I copied it from a cake photo I saw in a magazine. I cut a square cake in half for the sails and the bottom and then a smaller triangle for the jib (front sail) I frosted it with shades of blue and named it … Read more 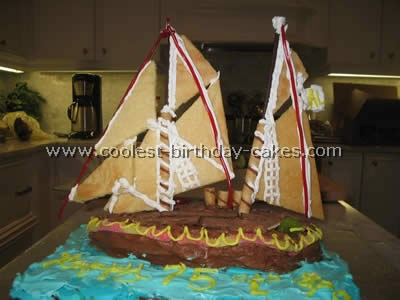 The schooner base was vanilla cake baked in a silicone loaf pan with the two end pinched to a point using large metal bulldog clips. The sails are sugar cookie baked on a cookie sheet and cut to shape as soon as it is removed from the oven. The sails are held together to the … Read more 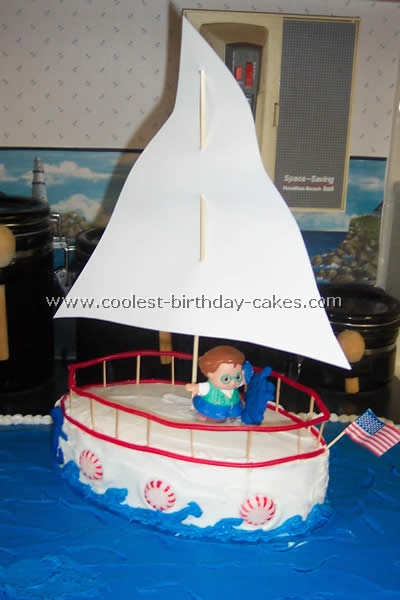 This cake was for a friends baby shower with a nautical theme. The bottom cake is a full sheet cake. The boat is made from two 9” round cakes that I cut in a boat shape and covered with white icing. The windows are made of peppermint candies and the rails are made of string … Read more 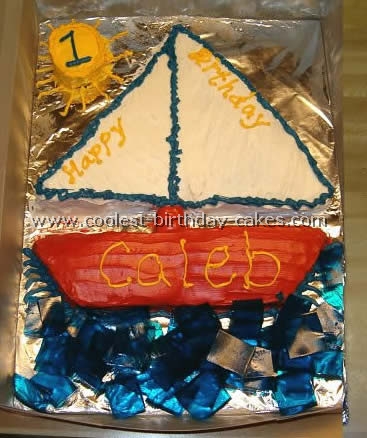 This is a cake photo of my son’s first birthday cake. I made it myself using a 9×12 pan and a mix. Once the cake was baked, I cut diagonally down the middle so I would have 2 triangles to use as the sails. I made one slightly smaller than the other. I also made … Read more 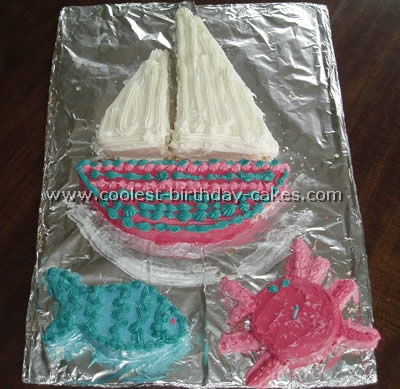 Basically I cut this cake freehand but you could look at our boat cake photo as a guide. I baked two 9×13 sheet cakes. I then cut one of the cakes from corner to corner with one side bigger than the other. That made the two sails. Then I cut an elongated half circle out … Read more 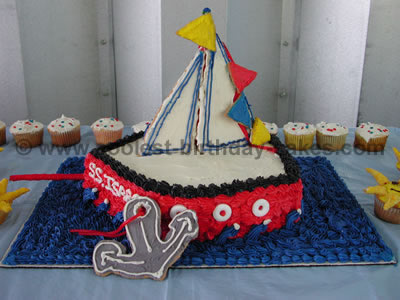 My Mother-In-Law made this awesome cake for my sons 1st Birthday Sailboat Party and I am submitting these cake pictures.This is an idea that was modified from the Creative Cooks cookbook. She used a knife to cut the cake in the shape of a boat after it was baked, placed it on a cardboard sheet … Read more