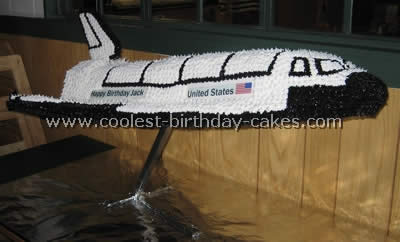 This is all cake except the stand that my husband welded. This was made from 10 13×9 cakes and sugar cones for the shuttle exhaust cones or whatever they’re called. My husband sculpted and frosted this with a filet knife and star tip; the lettering, Nasa symbol and flag are made from edible rice paper.

This was fun for my husband to create. Other celebration cakes can be found on this great site.

My son Cole has always challenged us with his unique birthday theme ideas and celebration cakes he wants. My challenge is always making the cakes myself for my children’s birthdays. Cole became fascinated with rockets and space so for his fifth birthday he wanted a space themed party.

We first found an excellent website for party supplies and favors (Astronaunt ice cream and party goods!) and then my husband and I came up with the concept for the cake. We used two rectangular loaf pans as the “body” of the shuttle. We used a 6″ round corning ware for the “fins” and square baker for the side fins and front point of the ship.

We then frosted all sides with white icing and I outlined the ship with black icing gel (for better visual of the ship). I copied the details from a toy space ship my son had. My husband cut the bottom part of three ice creams (the pointed side) and inserted them in to the back of the ship. We “untangled” red licorice and folded the pieces in half to make them appear thicker and these acted as “fire” coming out of the ship for take off. We used the computer to make a “flag” on a toothpick to announce his birthday!

I baked a 9×13 sheet cake and iced it with white buttercream icing. I traced a picture of the space shuttle onto wax paper. (Here is a web page with coloring book pages/pictures…)

Cut out the picture and place it on the sheet cake. I went around the edge of the wax paper with a toothpick. Then I spayed the cake with blue spray food coloring (available through Wilton’s). Going around it with a toothpick prevents the spray from “bleeding” as much under the wax paper. This left the outline of the space shuttle that I just went back around with black icing and filled in the details. Black icing hint: Dye chocolate icing black instead of trying to get white buttercream black.

The first step involved baking two rectangular chocolate cakes. The first one remained as is, serving as the base on which the shuttle resides. On the other hand, we butchered up the second cake in order to get the shuttle-like shape on top (basically, we cut a tube-shaped piece for the middle of the shuttle, and then triangular pieces for the sides).

We also saved a few blocks of cake to prop up the nose of the shuttle, so that it would be positioned in an upward fashion). Don’t worry that the cut pieces come out very uneven and crumby— the vanilla icing smoothes it out. The rest was accomplished by a trip to the local candy store.

We placed thick licorice pieces at the bottom for the exhaust, and around the sides to outline the contour. A few more jelly beans, plus a NASA logo out of brown icing, and we were done!

The last picture shows the mini-shuttles which we prepared for the kids at the party (made out of toilet paper rolls and cardboard, painted white); the kids attending spent time coloring the shuttles, playing with them at the party, and then took them home as souvenirs.

I was extremely excited about how realistic this cake decorating idea turned out! It wasn’t as complicated as it looked!

First I made a sheet cake and traced & cut out the shape of the space shuttle on the sheet (You can use the coloring book pattern from the NASA Kids website). I transferred the shuttle cake to wax paper. I used the leftover pieces to add another layer to the body portion of the shuttle, but not the wings. I glued the cake layers together with icing. Then I used a serrated knife to carve out the nose, so that it was smooth.

The secret cake decorating idea to a smooth, realistic cake is fondant icing! Roll out a large sheet of fondant icing and just lay over the whole cake, smooth down and trim. I used black and white icing for detail, which you can spend a lot of time on if you want all the detail. Use the tips of chocolate ice cream cones for the engines at the back. The vertical stabilizer is made from a graham cracker covered in fondant icing. To anchor on cake, cut a long, narrow depression in the top of the shuttle and push the fin into the depression. Support it at the top of the cake with several toothpicks through the icing.

Stick candles horizontally in the back of the shuttle and light for singing the birthday song.

I also made earth and moon cakes by pouring cake batter into a metal bowl and baking. For decorating, warm icing in microwave and add several drops of food coloring, but don’t mix in completely, so you get swirls of color. I used a paintbrush for detail.

Thanks for all the cool celebration cakes on this site!

Coolest Rocket Cakes and Lots of Ideas for Unique Cakes