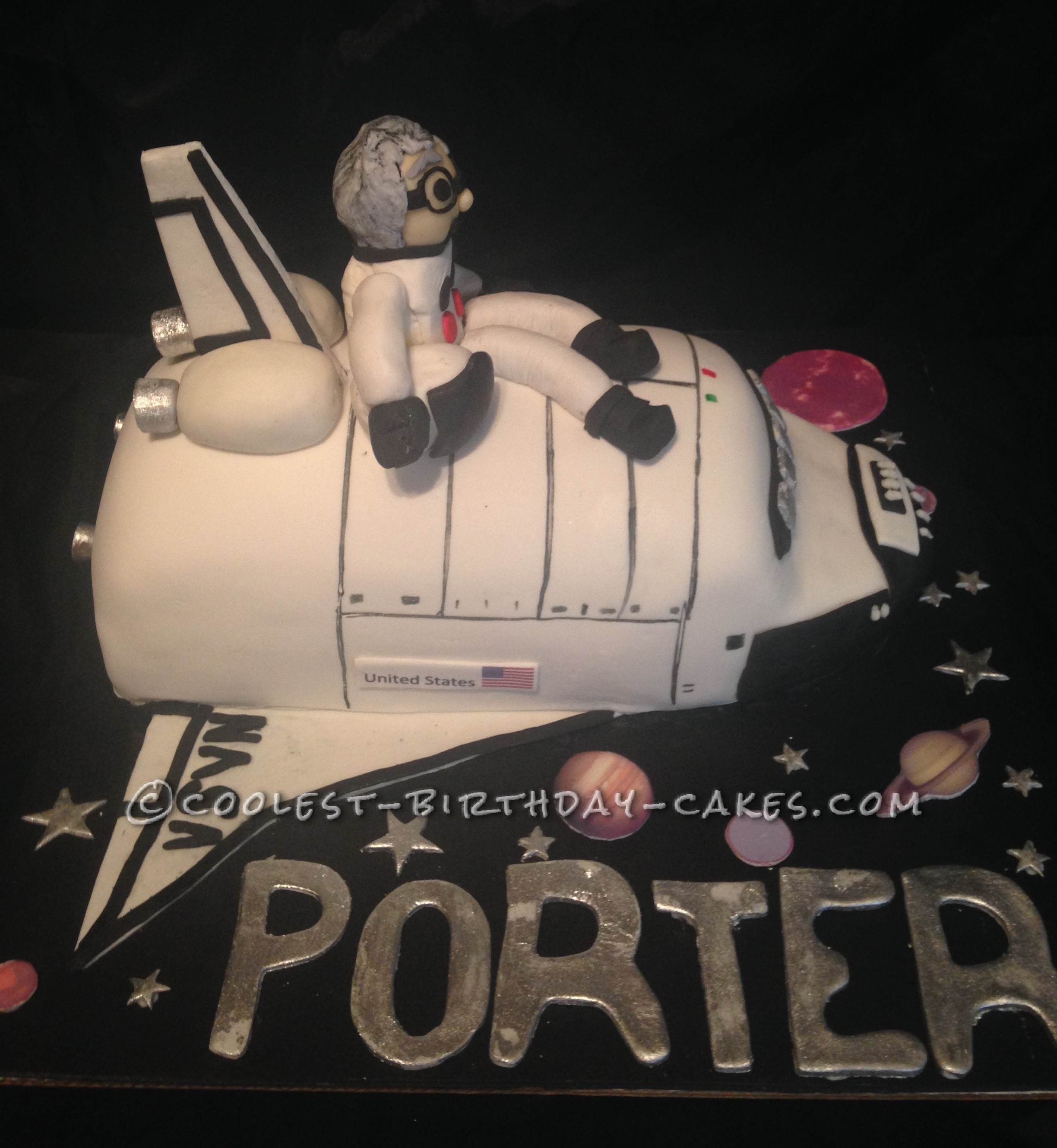 I made this for a client who was throwing an outer space birthday party for her son. I make her children’s cakes every year, and each year she pushes the bounds of my creativity. This year she was doing an outer space theme. The invitations invited the kids to “Blast off”!  I borrowed some of … Read more 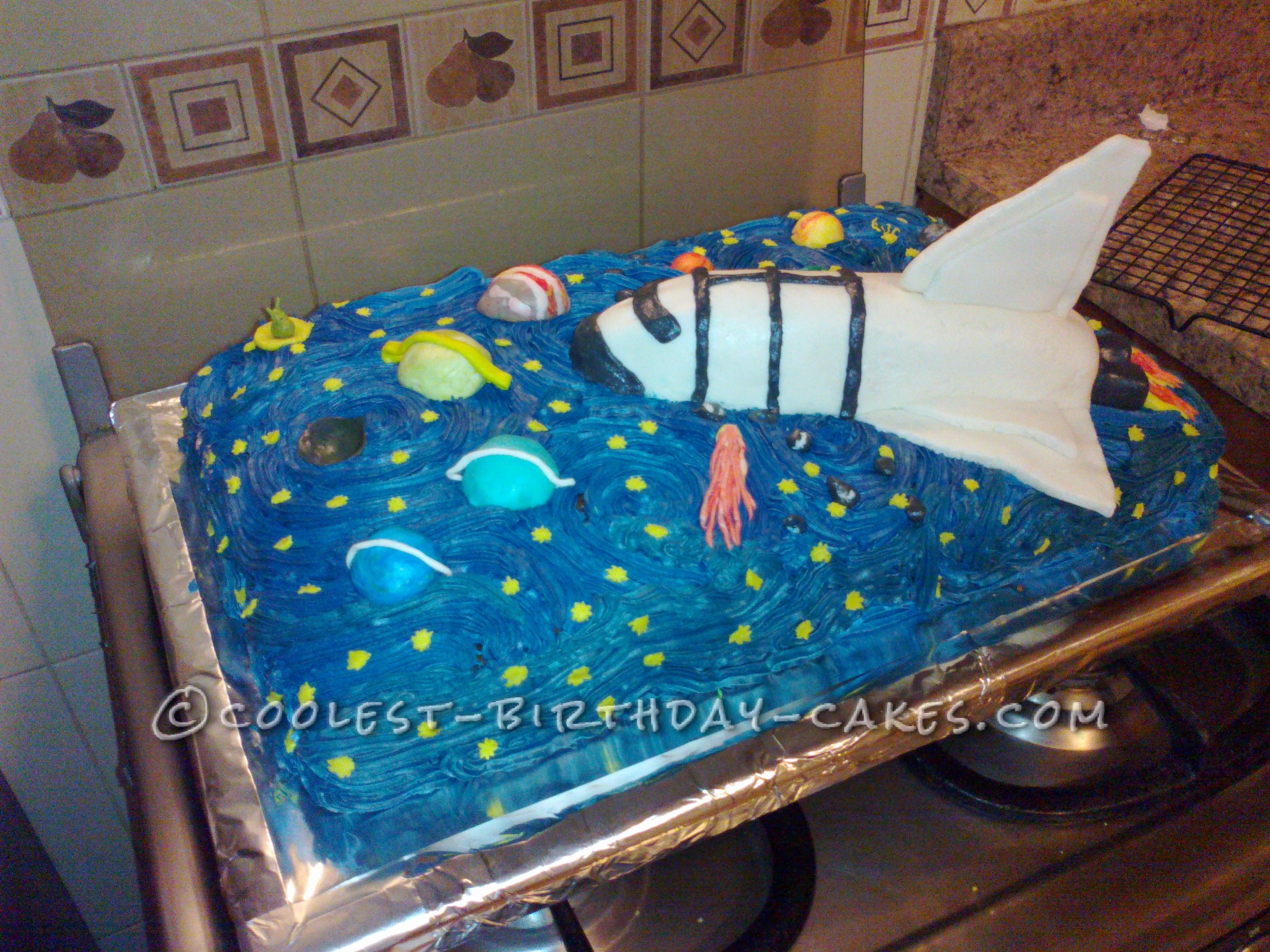 My son recently turned five, and is totally in awe of all things outer space: planets, comets, stars, rocket ships, astronauts, etc. For Christmas I made him an astronaut costume- which he loved, and wore the day of his birthday party- and as far as his 5th birthday party was concerned, I knew I would … Read more

I started off this space shuttle cake with a 9 X 13 rectangle cake. I down loaded the diagram from a web image and enlarged it 300%. I cut out the basic shape by placing the diagram at an angle and used the left over pieces for another level on the body. I used form stickers for … Read more 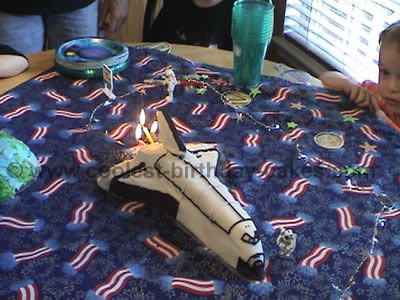 I was extremely excited about how realistic this cake decorating idea turned out! It wasnt as complicated as it looked! First I made a sheet cake and traced & cut out the shape of the space shuttle on the sheet (You can use the coloring book pattern from the NASA Kids website). I transferred the … Read more 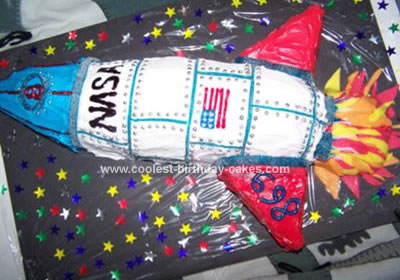 I made this NASA Shuttle Cake for the Sam Houston Area Council Cub Scout Blue and Gold banquet of 2009. I had a clean, new mailing box folded flat, with a piece of black paper on top. I added a piece of plastic wrap to this and added foil stars for effect. If I would … Read more 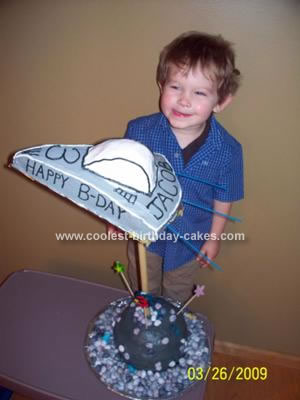 This Spaceship Birthday Cake is two cakes I made for my son’s third birthday. The planet (bottom cake) is three nine inch confitti cakes stacked and layered with strawberry filling, shaped round with a knife then frosted gray. The base is a pizza pan with holes, with a dowel rod screwed to the middle to … Read more 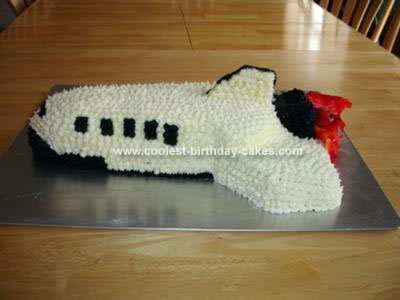 My son is totally into space and requested a Space Shuttle Birthday Cake. This cake was baked as a large sheet cake. I found several pictures of space shuttles from several different angles on line and printed them out. Using them as a guide, I carved out the base of the cake. Then, I carved … Read more 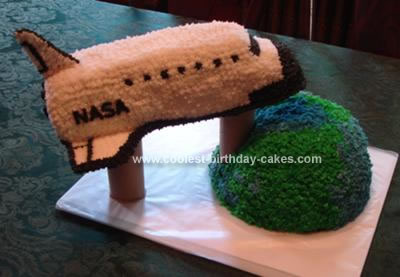 Our 3 and 5 year old boys love rockets and anything outer space so I made them this NASA Shuttle Orbiting Earth Cake. The earth cake is made from three layers of 8″ round cakes stacked together and then carved down to a half-sphere shape. My wife and brother-in-law then painstakingly tried to accurately portray … Read more 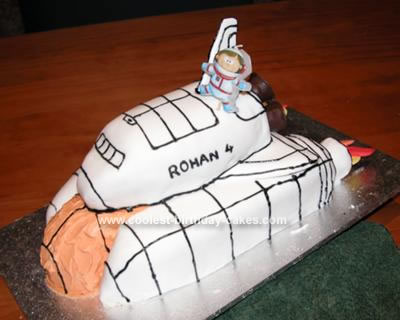 This Space Shuttle Birthday Cake was for my son’s 4th Birthday. He was having a space party. The shuttle came out a bit fatter looking than I planned but I was happy with the end result and most importantly my son loved it. I got some inspiration from some of the other great shuttle cakes … Read more 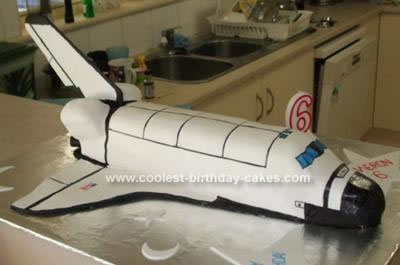 This Space Shuttle Cake is approx 55cm in length, consisting of 4 premix mud cakes. I used two for the lower half of the shuttle, one and a half for the upper. I fashioned the tail out of a piece of cardboard covered with royal icing. This is the only non edible part of the … Read more 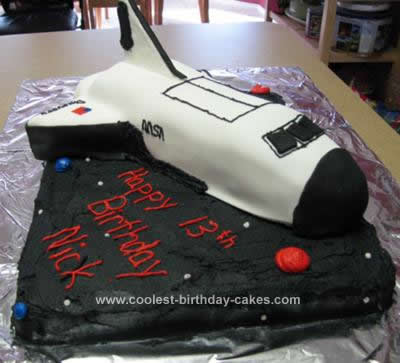 This Space Shuttle Birthday Cake Design was made for my son’s 13th birthday. I made this cake out of 4, 13 X 9 cakes. The bottom that looks like “space” is 2 of the 4 cakes. I put them together, leveled and ‘dirty iced’ them. Then I put a top layer of black on for … Read more 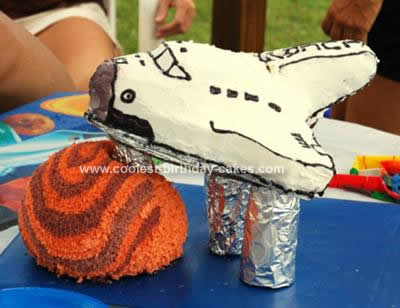 My son for his 5th birthday decided he wanted a space shuttle cake. I looked on this site and decided to go with a Homemade Space Shuttle Birthday Cake Design similar to one found here that included a planet. I also did some additional cupcakes, which have little alien heads on them made from the … Read more