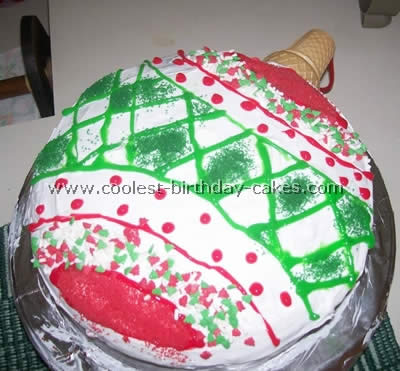 To make this cake I simply made two 9″ layer cakes and frosted them. I then used gel and sprinkles to decorate it like an ornament. I used a small cake ice cream cone as the top. With a tooth pick I poked two holes and strung a Twizzlers pull and peel as the string.

Good luck with your own Christmas cupcakes and cakes!

I made these ornament Christmas cupcakes as samples for a coffee shop and to show people what holiday items they could buy from me. First I made a regular batch of red-velvet cupcakes. I didn’t have the mini-ball pan to make the rounded tops so I made my own molds. I used a ball that was the same size as the top of the cupcakes and molded tin-foil around it.

Then I put the molds I made into the cupcake pan sprayed with non-stick spray and filled them nearly to the top. I cooked them as required by recipe. After they had cooled I peeled the tin-foil off of the cupcakes. I cut the tops off of the regular cupcakes and the bottoms off of the rounded ones. I iced buttercream between them to “stick” them together and then iced a thin layer of buttercream over the rounded tops. Then I covered them with fondant and trimmed off the excess, dusted some of them with pearl dust and some of them with platinum luster dust.

I did the decorations for the Christmas cupcakes with royal icing and after it had dried I painted them with gold and silver fondant glaze. I made the hook things out of fondant and the hooks with jewelry wire [that was the only un-edible thing except for the cupcake liners]. These are very easy to make and anyone can do them to add something special to their holiday parties! Everyone who has seen them loved them. Some even thought they were real tree ornaments!