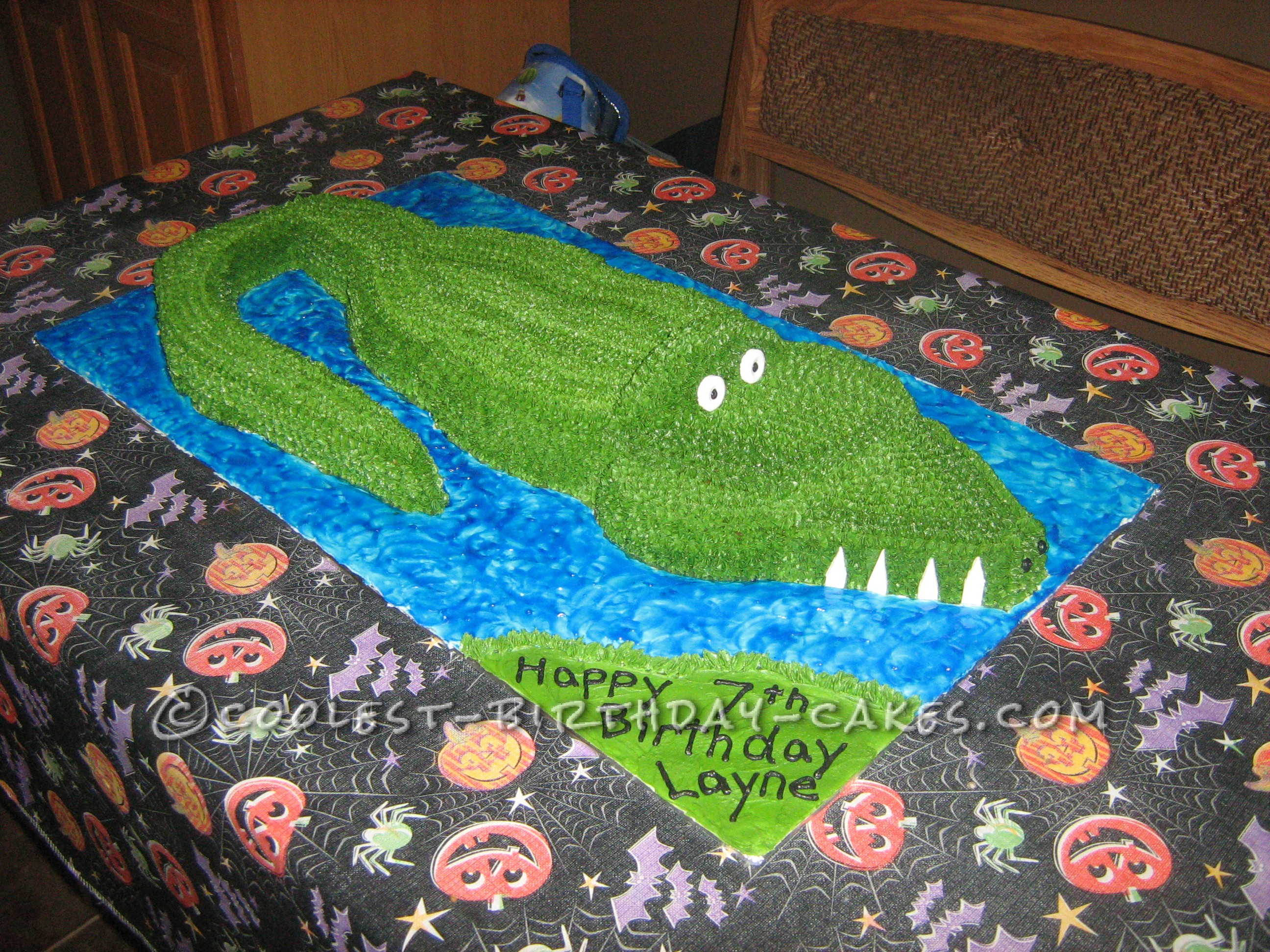 I’ve been doing cakes for my family and friends for a while now and never ask for a dime for them, I just like saving people money and making people smile. I’ve never taken any classes, just a lot of practice. My nephews always ask me in advance to do their birthday cakes and put in their requests. A year and a half ago my one nephew was turning seven and wanted an alligator cake which was new to me and never have made one before, actually I don’t think I’ve ever done the same cake twice.

Anyways, as I always do, I went onto the Coolest Birthday Cakes website to get some ideas. The one cake that interested me didn’t explain what pans were used  to make the shape of an alligator, so I used what I had here at home. I  drew out some templates to shape an alligator and used one 8 x 10 baking pan for the tail and two small heart shaped cake pans for it’s jaws ( cheeks ) , eye sockets and snout. I actually used a Wilton Owl cake pan for  it’s body which obviously worked out great. I got the idea of using Trident gum for the teeth and cutting off corners to get their shape from the Coolest Birthday Cakes website.

I used Certs peppermint candies for the eyes and put some black butter cream icing in the middles for the pupils and for the nostrils. I used a piece of plywood wrapped in aluminum foil to place the alligator on. After I piped on the green butter cream icing using star tip 21 I then applied some blue piping gel around the gator for the water using a butter knife.  I then triangled off a corner of “grass” so I would have some room to put on the birthday greeting. As I was doing all of this, I had a technical support worker from Bell in my home trying to fix my phone line and he was so distracted by the cake that a five minute job turned into an hour job.

Amongst all of the chaos with my phone line being repaired and being elbow deep in green butter cream icing, I had totally forgotten to buy my nephew a birthday present and had no time to run into town ( that’s what I get for leaving the cake to the last minute). I like to make sure that my cakes are as fresh as they can be. So when I got to the party and before I got the cake out of the van, I had a little talk with my nephew, explaining to him why I didn’t have a gift in my hands for him and if it would be okay if the cake can be his present for now, he understood but did look a little upset and I felt horrible.

As my nephew was playing with friends and cousins, I slipped past him with the cake and he followed me into the house to the kitchen. When I sat the cake on the table, his face lit up and was so excited that he called in all his friends and showed off the cake and said, “aunt Kelly, this is the best birthday present I have ever gotten”. He brought tears to my eyes. I have two children of my own and I have never even seen them as excited on Christmas morning than he was that very moment. As all the parents were dropping off their children my nephew stood beside his cake the whole time so he could tell everyone that his aunt Kelly made it, he was so proud. 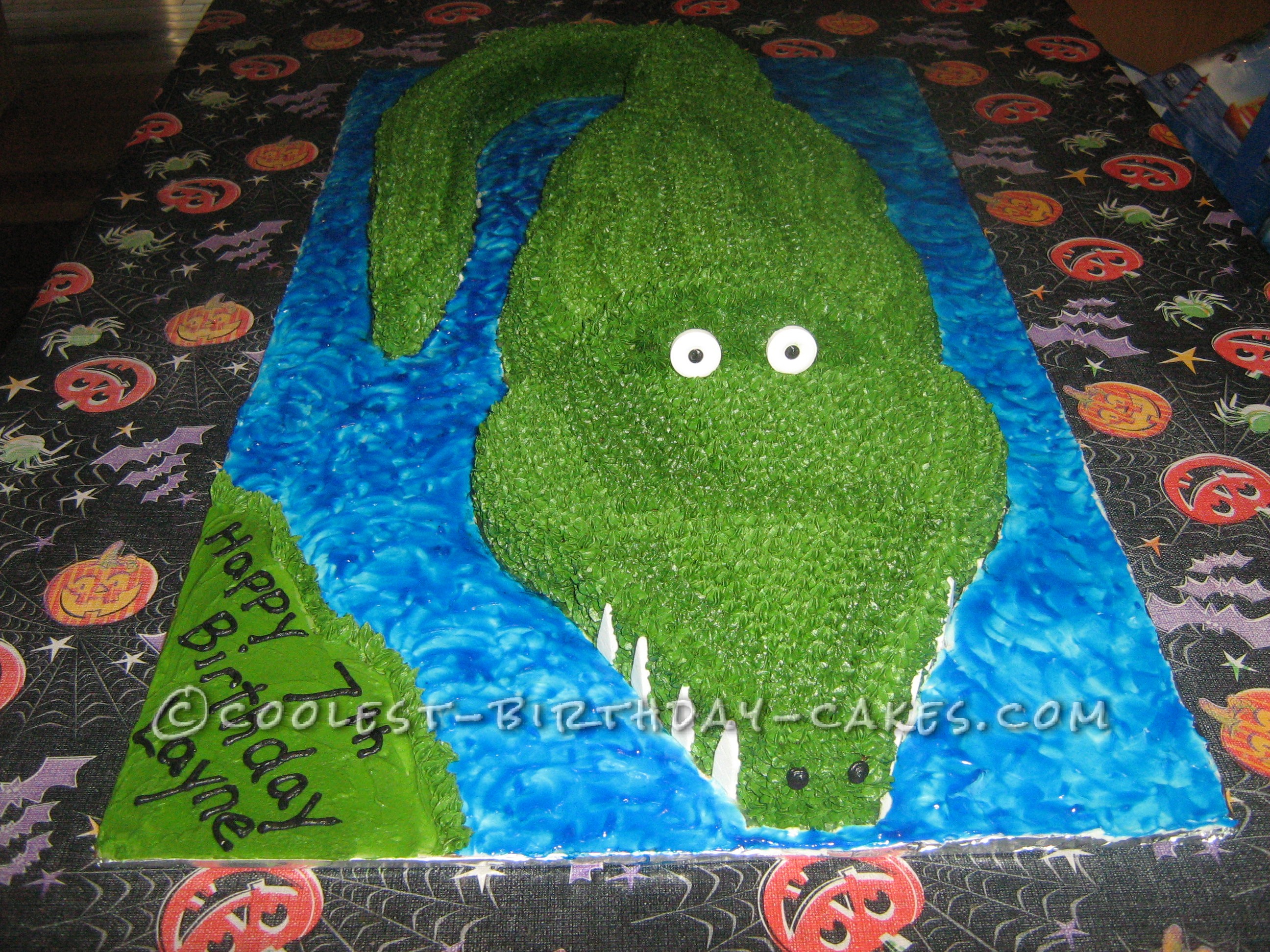