I baked an 11″ x 15″ cake and frosted it in a home made light pink buttercream frosting on the top of the cake and a darker pink frosting around the sides.

I used home made marshmallow fondant, separated it and colored it several different colors. I used a page from a “Hello Kitty” coloring book to help me with tracing and cutting out the shapes of the Kitty’s head, body, arms, legs. I cut out each piece of the Kitty and then traced it onto wax paper, then cut out each shape on the wax paper. I laid the wax paper shape on top of piece of rolled out fondant. I used a small knife to cut the fondant the shape I needed. I first cut the shape of the body and placed it onto the center of the cake to make sure I had the entire Kitty centered. Then I cut out the Head and placed it onto the cake above the body. Next I cut the Hat,Bow, Eyes, nose and placed them ontop of the head. Then I cut the legs and feet and placed them onto the cake under the body. Last was the present and bow and then the hands ontop of the present to look like the Kitty was holding the present, I then used a star shaped cookie cutter to cut out the stars and placed them around the Kitty.

I rolled and cut purple colored fondant into 1/4 inch stips. I measured the height of my cake (I believe was around 2 1/2″) This was the lenght I cut the purple strips. I placed them around the sides of the cake at a diagonal every inch or so. Making sure they were spaced evenly.

The ruffle border around the edge of the cake was piped with the home made darker pink buttercream. I used an extra large 2A piping tip and moved the tip in a back and forth motion along each edge.

The cake was a big hit at the party and the guest of honor was thrilled with her “KItty Kitty”! 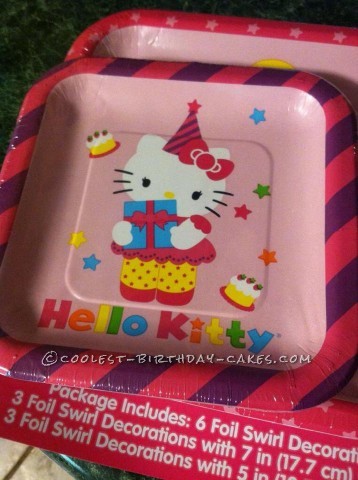 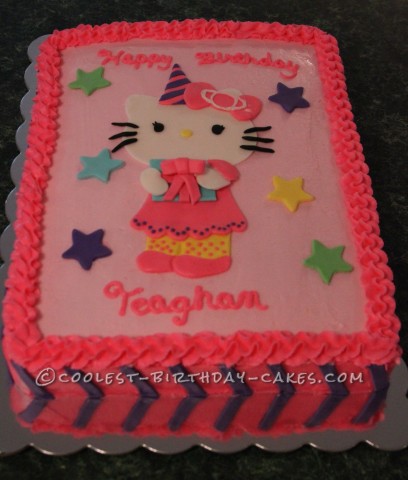