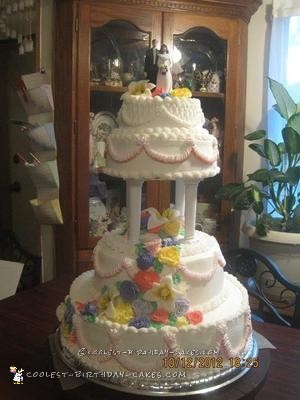 I was asked to make a wedding cake for a friend’s daughter’s wedding. I normally only do birthday cakes but told her I would be up to the challenge. She told me what colors and that she wanted a tiered cake and how many people would be attending.

I started out with a 13” round cake for the base. I then made a 10” for the second layer. The top layer is an 8” and 6” consecutively. The very top was to represent a basket weave type stand for the bride and groom. I made each layer with a layer and ½ rather than 2. I wanted it thicker than just one but 2 would have been too much.

I placed several dowels in the middles between each layer to keep the layers from caving in on each other and the layers all had cardboard on the bottoms of them for support. I got a picture of the bride’s bouquet and tried to copy it as much as possible for the cascading flowers.

It was such a hit that I have been asked to make others, guess I am in the wedding cake making business now along with birthday cakes LOL.