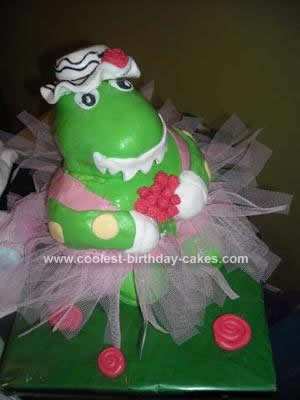 This 3D Dorothy the Dinosaur Cake was a bit of a mission! I had the idea in my head, but had no idea how to bring it all together. So I trawled the internet looking for advice, and put together some of the ideas I found.

The basic body shape for Dorothy was actually taken from a 3D Winnie the Pooh Cake Tin that I hired from a local shop. I cut off the ears, cut out the honeypot, and did a bit of reshaping to make his head flatter.

Then using a skewer for reinforcement, I added a bit of fondant to bring the face further forward. I also made the feet come forward more with fondant. The tale is molded from Rice-Krispie Treats. (250g melted marshmallow, 2 Tbsp butter and 5 cups ricies).

After freezing overnight, the cake is covered in a cream cheese frosting, then in fondant. The fondant was applied in three sections. By wrapping around the body first, then over the head, and finally the tail.

The tutu is made from the cheap stiff tulle that most fabric stores have, and tied onto an elastic band.