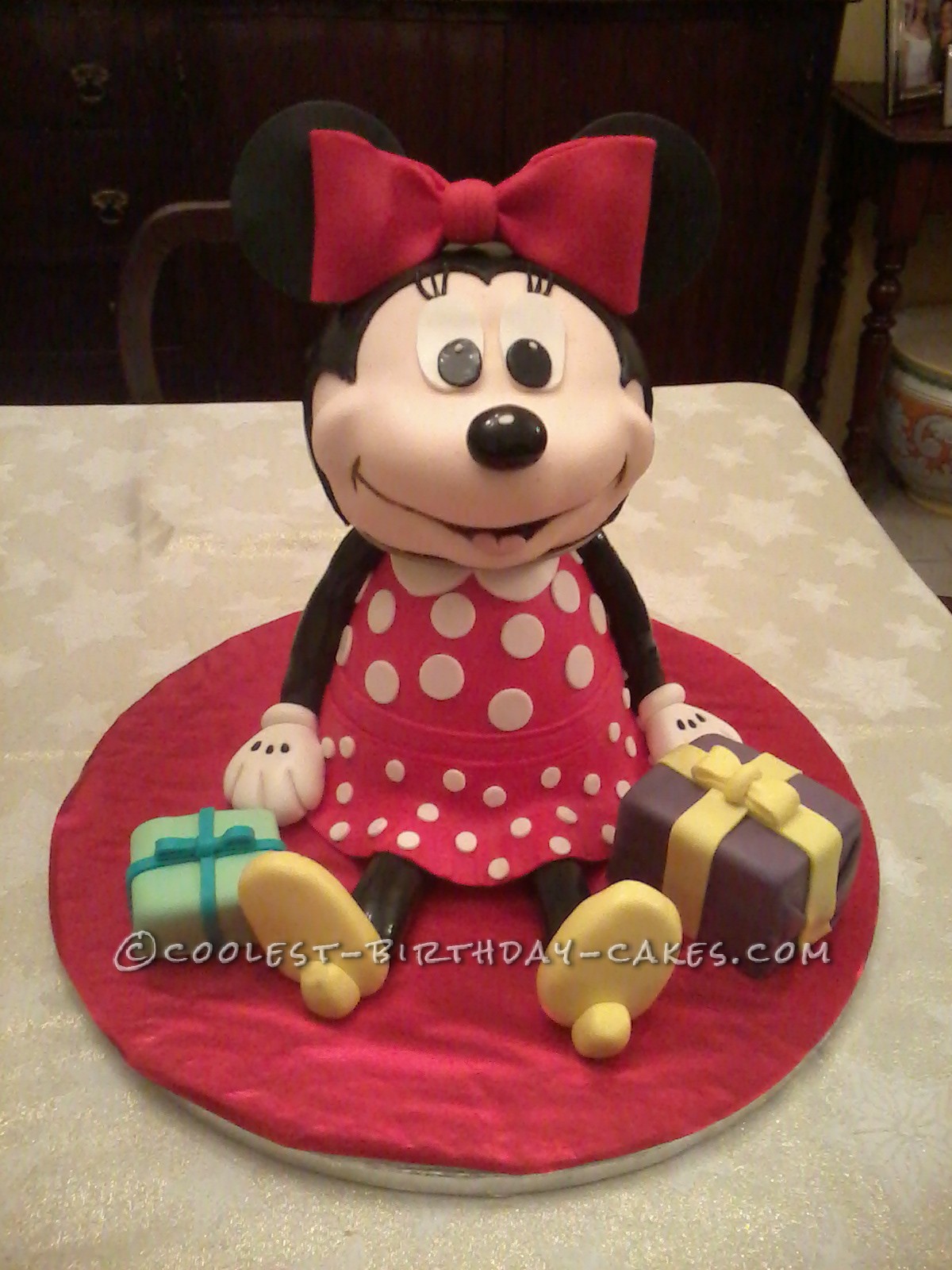 Girls love Minnie mouse. A few weeks ago a lady phoned me and asked me if I can make a cake for her daughter’s first birthday. She wanted a Minnie Mouse cake because she had this big Minnie Mouse soft toy which she simply adored. Since she wanted something a bit special I decided to make a cake which looked like a Minnie mouse doll.

First I covered the cone with red fondant and put it onto the cake board. For the skirt, I cut a rectangular shaped piece of red fondant and wrapped it all around her waist. I cut some white fondant polka dots and put them all over the top and the skirt.

When I came to the head, first I had to carve it in order to create the mouth and the pronounced cheeks. When the sculpting was ready, I covered everything in flesh colored fondant. After that, I laid out some black sugar paste and placed it on top of the head. Then with the help of a sharp knife, I cut carefully the black fondant and removed the excess. Then  I made the eyes and the mouth.

For the ears and the big red bow, I mixed some gum tragacanth with some black  and red fondant. Then I laid out the black fondant and cut out 2 big round circles. I formed the bow from the red fondant and left them overnight to dry and to harden. The next day I placed the ears into their place and attached the bow to them. For the arms I molded 2 pieces of black sugar paste into 2 thin sausages and attached them to her body. The same thing I did for the legs too. Then I molded the her hands and her yellow shoes.

Minnie Mouse was ready but it still needed her parcels so I cut out 2 small squares from the third cake which I had baked. Covered them in 2 different colored fondant and did a ribbon for each one of them. I placed them next to Minnie Mouse and voila, Minnie Mouse is happy sitting next to her parcels.

The difficult part of this cake was definitely the head because you have to make it look like the original thing as good as possible so during the carving you have to be very careful cause once it is covered with fondant, there is no way you can correct any mistakes.

But the best thing about a 3D cake is when people ask you with an incredulous look;  ” Is that really a cake?”.