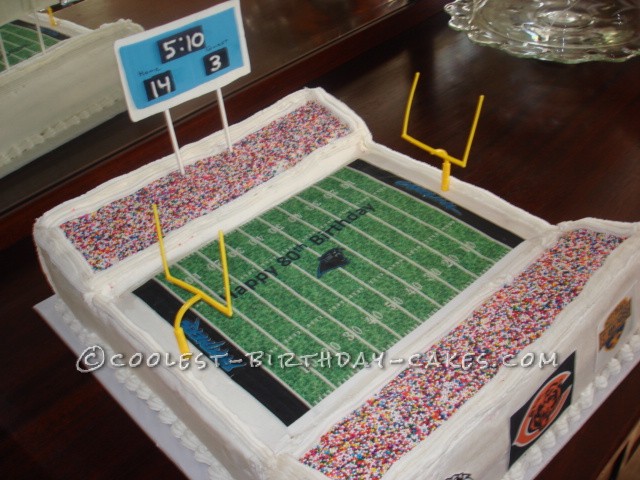 This  Football Stadium cake is made from the 2 9 x 13 white almond sour cream recipes.  The field is one cake.  The stands are the other cake cut into 3 long pieces.  One is then cut at and angle and each of the sections are laid on top to form an angle for the stands.  The field is made from a sugar sheet using an edible ink printer.  Several rows of butter cream icing using tip #47 to build up and in between the side of the field and the stands.

A star tip #21 is used to edge the stands.  First the people are to be put in place (I used sprinkles but small candies can be used).  Place them over fresh butter cream so they will adhere and not roll all over the field.  Then using the star tip make several rows to build up and surround.  Fill in any gaps on the sides where the field and stands meet.  I used edible image sheets to create 3 symbols of my father’s past; his college crest, hometown team, and the school he was pop Warner head coach.

It is a heavy cake so I went to Lowe’s and had them cut me a board, then covered in a cheap plastic 1$ store table cloth.  This way it would not bend and crack the crusted icing.  The score board was made from gum paste and fondant.  The writing was butter cream and a #3 tip.  The goal post were from a package that also had little players but chose not to use.  Next time I will make my own using pipe cleaners and stitchwich. 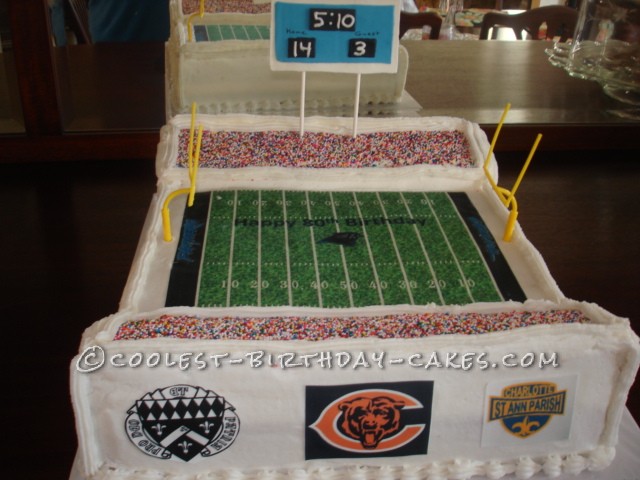