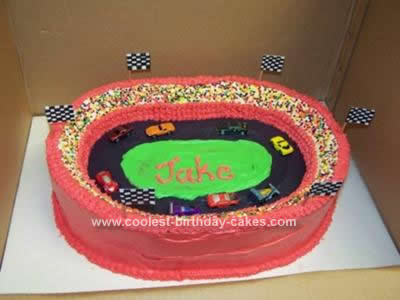 I wanted to make my son a race car themed cake for his 5th birthday. I found lots of great ideas on here and eventually settled on a stadium style race track cake.

I started out by baking two 11×15 sheet cakes in our family favorite, Butter Recipe Golden. I stacked the cakes and then cut them into an oval track shape. Then very carefully trimmed the top cake at an angle, completely removing the middle, to make the stands.

The cake was iced in red around the outside (birthday boy’s favorite color), and white where the stands would be. I then iced the track black and a green grassy area in the middle. The “fans” in the stands were Wilton’s jumbo rainbow colored nonpareils, placed onto the white icing. I then put some finishing touches, in red. Using Wilton tip # 16, I went around the exterior bottom, along the top rim of the stands, and again on the interior directly beneath the fans. I also piped my son’s name in red in the grassy area.

I bought a couple of packs of Micro Machines race cars to use on the track. I found they looked better than the larger Matchbox cars. And he was thrilled he got to keep them!

I also purchased black and white checkerboard toothpick flags, however, I could not find them when I was ready for them. So, these flags were made by hand! I cut out long strips of white paper and drew on the checkerboard pattern with a black Sharpie. I then taped them around toothpicks, and they worked just as well.

All in all, even though I rushed, everyone was happy!