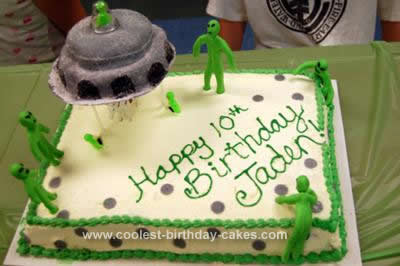 My son wanted an “Alien” themed birthday this year, and I struggled with an idea for a cake- finally I came up with this Alien Spaceship Birthday Cake! I started with a plain, white iced cake. I used Wilton Kelly green frosting color for the trim, using a #16 star tip.

The large aliens are created by using colored fondant, shaped into arms, legs and a head. I used toothpicks (pushed inside the fondant forms) to stabilize the body parts. This is nice, because when you attach the head, it can actually turn from side to side on the toothpick. The eyes and mouth were also fondant, stuck on with just a little water.

For the spaceship, I used 2 mini bundt pans, cutting off the ridges and shaping as necessary. I used the bottle top to a candy baby bottle (found in stores) as the cockpit to the ship, and a tiny plastic alien as the pilot. I used gray and black coloring for the spaceship fondant.

The ship was set on a round piece of cardboard, on top of clear plastic forks to make it “hover” above the cake. I used a plastic cow as the abduction “victim”. I thought about fastening a mini flashlight underneath, but didn’t have time. Anyhow, this cake was a hit and all of the kids were fighting over who got to eat the aliens! Enjoy!