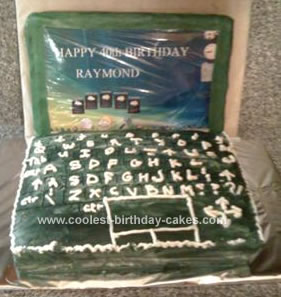 I made this Apple Computer Cake for a friend’s brother-in-law’s 40th birthday. He works in IT. I baked two high rectangular chocolate cakes which I then cut and sandwich with chocolate mouse and set them into a Notebook shape. I was given a very short notice for the cake and I was doing two cakes on that day so I had to improvise.

To make the screen of the computer, I printed out a Mac screen with my color printer and sort of laminated it with a clingfilm, placed it on the part of the cake that supposed to be the screen and framed it with fondant. The back of the Notebook was held in with 4 big tooth picks and Apple Logo was placed as well.

The cake was iced with my home-made citrus butter cream icing with coconut flavor. The Notebook was done in a hurry, I had to make some keys in duplicate since I didn’t do a layout but it turned out great and tastes wonderful!