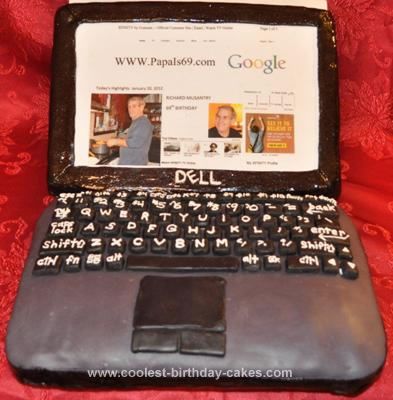 My 9 year old daughter and I made this laptop cake for my dad’s birthday. We began by making homemade marshmallow fondant. We used black Wilton icing color to make gray fondant and wrapped it tightly in plastic wrap and placed it in the refrigerator for later use. We then made a second batch of fondant, adding even more black icing color to make the black for the keys. The black color did not change the taste of the fondant.

We used a tiny square cookie cutter to cut out the letter and number keys. I used wax paper to trace the small top row of keys as well as the bigger keys (such as the tab and shift keys) and cut them accordingly. We tried to make the keys as realistic as possible. We put the 80 keys plus the rectangles for the mouse in the refrigerator overnight.

The second day we made the main part of the cake in a 9 x 13” rectangle cake pan. After it cooled, we covered the cake with butter cream icing, and then covered it with the gray fondant. I wrote all of the letters, numbers, and symbols on the keys with royal icing. My daughter placed all of the keys on the cake, making sure they were spaced properly, then placed a dab of royal icing on the back of each one of them so they would stick to the cake.

The only part of the entire cake that is not edible is the picture that I placed on top of the screen. I designed it on the computer, copying and pasting some items, such as the top videos, weather, and email tab directly from my homepage. The grand kids call my dad “Papa” and it was his 69th birthday, so in the Google search engine I put www.PapaIs69.com.

I had his birthday in the day’s highlights. I printed out the paper, added two pictures of him, and laminated the paper so it was covered in plastic. On the third day we made the screen using rice krispie treats. We covered the rice krispie screen with royal icing, placed the homepage on the screen, and placed black fondant around the edges, carefully cutting it to match at the corners. My husband made a wood base to put the cake on. We covered it with fancy wrap, placed the cake on the bottom board, covered the top board with royal icing and put the rice krispie screen on. We covered the edges of the screen and the border of the cake with Wilton Sparkle Gel.

I wrote Dell on the screen and drew an arrow with icing on the screen (like he was clicking on his name to read about his birthday) and the computer was complete. The cake turned out great. Next time I will have the board made with less of an angle, and the top board about 1 inch lower. I will also add one more row of keys to get all of the arrow keys, but I will keep everything else the same. 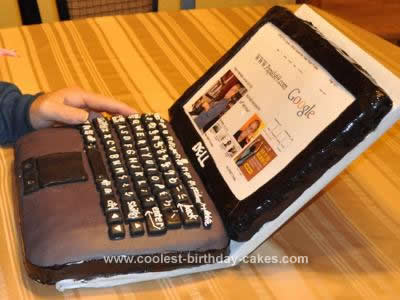