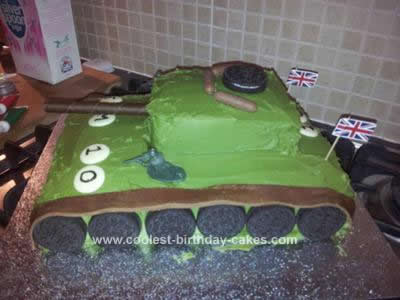 My son recently turned 10 and wanted a surprise birthday cake. I chose to make him an army tank birthday cake as he is always playing soldiers and loves anything to do with the army.

I did so much research, including this site and decided that it would be best to keep in simple. I baked two 20″ square cakes which I flavored lemon and also added green food coloring too – wanted to see the look on his face when the cake was cut into.

I cut one cake in half and butted it against the other, to make the base and then turned the remaining half lengthways and used this for the top of the tank. These were glued with green butter cream – the color was important so to turn the bright green into an army green its best to add red food coloring, believe me it works well. I carefully coated the whole cake with the army green butter cream.

Then set about decorating it. The wheels are made from Oreo cookies which were perfect and one laid down on the top as a “hatch”. I put white chocolate buttons on the front as “headlights”, and then used some extra ones to decorate it with my son’s name and his age. The gun is a cookies n cream long wafer poked into the top cake. To make the tracks over the Oreos I used chocolate fondant rolled out and then cut into strips and draped them over the Oreos. I used mini chocolate fingers around the hatch and to finish it off I made two British flags on toothpicks to stick in the back of the tank.

The look on my son’s face was absolutely fantastic, makes it all so worthwhile, he loved it. Oh and I also flavored the butter cream icing with lemon too, the cake didn’t last two days! 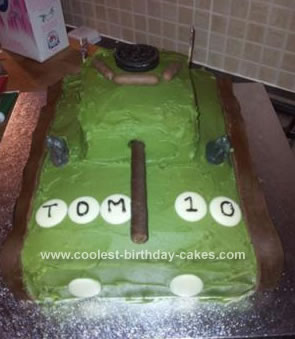