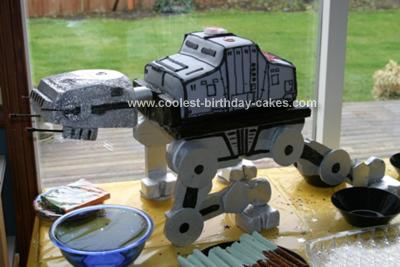 I searched all over the internet for a cool Star wars cake to make, and either they fed too many, or were way too complicated! My son was set on having an AT-AT Star Wars cake, and I didn’t want to do a flat one, or have figures on a cake. I have done cakes in the past for a living, so I called up my Mom who works with wood, and gave her a drawing of a stand to make that would support the actual cake part of it all.

I then carved the cake into the AT-AT shape as best as I could. It was mainly the top area of the cake that needed to slant down to the front and angled a bit on the side. Then frosting was next and a night in the cooler to set up. I then rolled out grey colored fondant the next day and covered the cake in that.

I used royal icing tinted black and red to do the piped lines on the cake. I had a photo of a real AT-AT from the net that I tried to follow as a pattern. My son said it was a cool cake but still said he wished it would shoot fire.