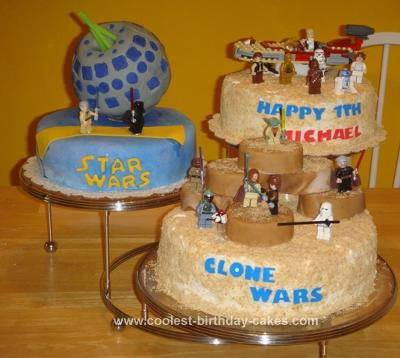 When my grandson was turning seven (7) he couldn’t decide between a Star Wars Cake or a Clone Wars Cake, so I incorporated both into three cake scenario.

This Star Wars vs. Clone Wars Birthday Cake was great fun to make. I purchased the Star Wars/Clone Wars figures at the local Lego Store. The first cake was the Star Wars Cake with the Death Star. On this cake we have Darth Vader fighting with Luke Skywalker.

The Death Star is made from a Styrofoam ball which is covered in fondant. Square and round cutouts make for the windows. The base is covered with blue fondant and yellow letters.

The second cake, the middle cake was covered with butter cream and crushed vanilla wafers to simulate sand on Luke Skywalker’s home. The top of this cake has a speed racer (which my son-in-law put together for me) and the characters from the original Star Wars.

The third cake was the Clone Wars Cake with rock formation and characters from Clone Wars. The rock formation for this cake were made from rounds of Styrofoam covered with fondant. This cake was a huge hit especially in the eyes of all the kids. They all wanted a Star Wars cake for their birthdays.

All three cakes were yellow cake with butter cream and fresh strawberries as filling.

Here is what you will need – 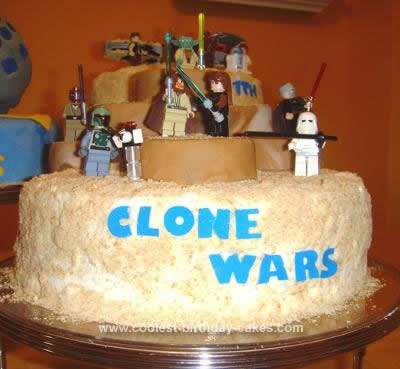 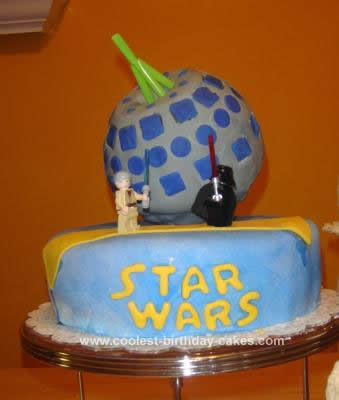 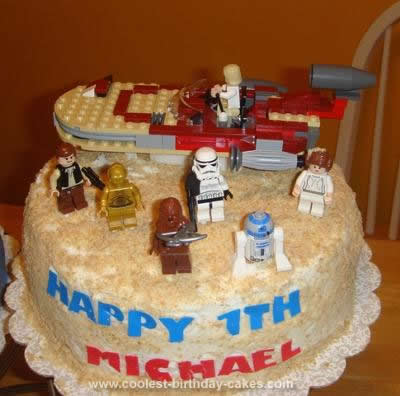