For his 7th birthday, my nephew requested that I make a Lego Star Wars cake for his big party with all of his friends. There were two things he wanted most. First, he wanted the Star Wars logo on it and second “lots and lots and lots of Storm Troopers”.

I created a cake that is meant to look like two Lego pieces and staged a Star Wars battle with Lego mini-figures that I won through Ebay auctions. Honestly, the hardest part of this cake was hovering over the auctions to get those figures!

After the cakes were baked and completely cooled, I placed them on cake boards and crumb coated them. I then tinted the fondant to the correct color and rolled it out on a baking mat.  When I had the right size for the cake, I picked up the mat with the fondant on it and then placed it over the far side of cake and draped it over the cake.  I was then able to gently peel the mat away.

To get the edges, I gently went around the cake smoothing out the fondant only part way down while fanning out the ‘skirt’.  This made for crisp corners.  I used a shot glass to get the pegs for the bricks and placed them on top.  I almost didn’t put pegs on the sheet cake – but it’s a good thing I did!  As it turned out every one of the kids wanted a piece of cake that had a peg on it!

To get the Star Wars lettering on the fondant, I had printed out the logo and placed it over the piece of fondant.  Then with a sharp skewer, I traced the lettering so that is made an imprint in the fondant.  Then I used royal icing to just fill in the tracing and let it dry before attaching it to the brick.

I sank dowels into the sheet cake where the brick would be set and then placed the figures strategically on it with royal icing to hold them in place.

When they brought the cake out at the party, my nephew yelled  “My CAKE!!!!” and all the kids charged the poor party pro.  I didn’t think the cake was going to make it to the counter.  I got these photos while they were trying to get everyone settled again. 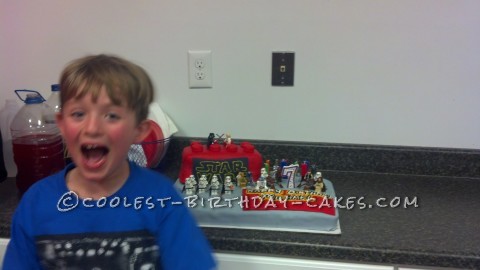 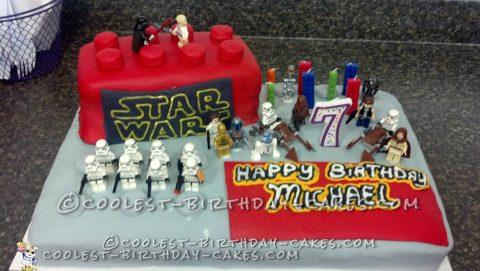