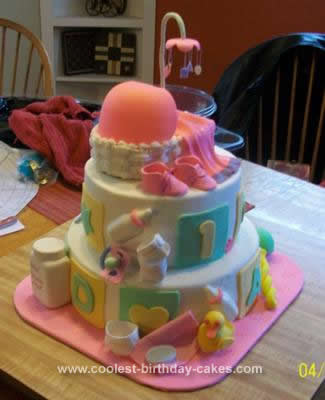 This is the Baby Shower Cake I made for someone my husband works for. The first thing I had to do was decide what I wanted to put on the cake as I knew that those pieces would need time to dry and there would be several so there would be surprises all the way around.

For the rattle I found a round plastic object the size I wanted, because I wanted it to really rattle. I rolled out fondant and placed it on the round object that I removed after it was dry. I glued a small ribbon of fondant over the seam to hold the little balls inside and to cover up the seam. The handle is a piece of rolled fondant, twisted, with the end made to fit the ball and left to dry. I then glued them together with a dab of water. The baby powder bottle is a piece of the sandable Styrofoam covered in fondant. The round top was cut from fondant as well and I used a toothpick to poke the little holes in the top where the powder comes out I used a red food coloring pen to write with.

The rubber duck body is just molded out by hand. I made the head, beak and wings separate and when dry I glued them together. The diapers are small pieces of rolled out fondant and the rounded leg spots were marked out as well as along the top with a pointed sculpting tool.The pieces were then folded and overlapped to look like the side tabs were closed. The pacifier pieces were cut out and left to dry and then glued together as well. The baby washrag on the bottom edge I rolled from fondant and then used a small imprinting tube to put in the printed design, set it up against the back-splash of my counter to dry in the position I wanted, so it would stand up and lean against the cake that also has a bar of lavender soap made from fondant. I then glued the two pieces together.

The baby booties are from fondant as well, though you can use gum paste or 50/50. I found a pattern for the booties on the internet. I put a small hole where the laces would go and after they dried I laced them with pink ribbon. The baby bottles around the cake are molded white chocolate from a plastic mold I found at a craft store. The top of bassinet I molded from a bowl upside down that was the right size I needed, cut it the shape I wanted and let it dry. I was then able to attach it to the cake by just pushing it down into the frosting. The blocks that go around the cakes I cut 3” squares from fondant as well as the letters and numbers from plastic cookie cutters I found. I didn’t do these ahead of time because I needed them pliable to match the round of the cakes. The cakes are covered in butter cream and then smoothed out. I had to put small food safe dowels in the bottom layers to support the middle. The middle cake of course in on its own cardboard cake round as is the bassinet.

My favorite, the mobile, I used a pink plastic flower cutter to cut the shape I wanted, draped it over something that would give me the right round shape and then after it was dry I was able to attach the tiny fondant shapes using just regular sewing thread. The pole for the mobile is floral wire bent and covered in fondant. The cakes are each 2 layers, except the bassinet is only one layer, crumb coated and then covered in butter cream.

I love doing cakes and just wanted to share this one. I also must give credit where credit is due. I now have one of my sons hooked on this stuff, and he’s 32. Though he said he didn’t know how I did the small tedious stuff because he really didn’t like to, he helped me to make some of the small pieces such as the diapers and pacifier. He now wants to know when I’m doing another one and if I need help.