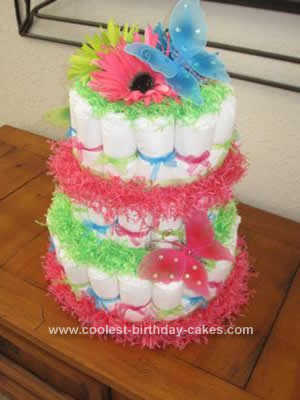 My 12 year old daughter and I designed this Homemade Butterfly Diaper Cake Design for a baby shower. The colors are lime green, blue and magenta. The cake consists of about 55 to 60 diapers. I prefer using size 1, all white diapers so no color shows on the outside. If, there is color on the top of the diaper, I fold it in as I roll it so it does not show. I used small rubbers to hold the shape of the diapers.

After rolling all the diapers up I tied ribbon around each of the diapers in the three different colors. The base of the cake was a 14 inch cake circle. Using curling ribbon tie 3 diapers together in a diamond shape with the ribbon showing. For instance pink and blue ribbon showing and a plain rolled diaper for the back of the diamond. I used a paper towel holder in the center of the cake board. Leave appr. 1-2 inches of towels on the roll. Diapers should touch the paper towels, then using curling ribbon I tied the diapers to the center.

After completing all layers I tied 1 inch lime green ribbon around the base of each layer to cover the white curling ribbon. I trimmed each layer with a magenta fuzzy trim to cover the tops of the diapers and used it also on the top for the base of the flowers. I topped the cake with 3 beautiful flowers and 3 butterflies.

This the second cake I have made and it was hit! 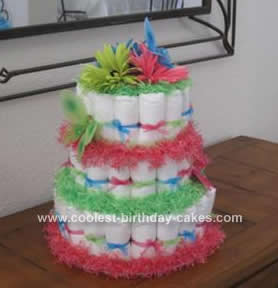