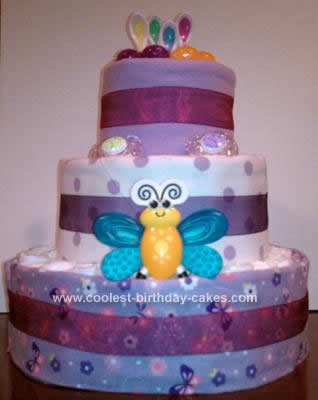 I’m hosting a baby shower for a good friend of mine and decided to make a Baby Girl Diaper Cake as my gift to her.

I used one 92 count box of Pampers Swaddlers size 1 diapers, rolling and rubber banding each one individually. I used all but about 8-10 of the diapers in the three-tiered cake. Next, I used a 12-inch cardboard cake platter as the base with a large (27 oz) bottle of Johnson & Johnson’s Original Baby Lotion in the center. Next, I used a rubber band to make an initial layer around the bottle.

I continued this process until I had three layers of diapers in the base tier of the cake, using a new rubber band for each additional layer. Once the base was constructed, I used two identical flannel receiving blankets folded in width to the height of the first tier. I wrapped the blankets around the bottom tier to cover the diapers and secured them together with a safety pin on each end. Once secure, I used a 2-inch wide decorative ribbon around the tier, securing with double-sided scotch tape.

I constructed the second tier in the exact same fashion, but only used two layers of rolled diapers. The second tier is surrounded in one flannel receiving blanket and a 2-inch wide decorative ribbon in the same fashion as the first tier.

For the third tier, there was still a little bit of the lotion bottle sticking out, but not enough to completely secure the top tier on. I created a single layer of rolled diapers around the tip of the bottle and stuffed one diaper in the center on top of the bottle, so it stuck out a little above the rest of the diapers. Again, like the bottom and middle tiers, I surrounded the tier in a flannel receiving blanket and 2-inch wide decorative ribbon.

To finish off the cake, I stuck four baby spoons down through the rolled diapers of the top tier like candles and laid a teething ring on top of the top tier, which is secured by the spoons. On the middle tier I added two pacifiers and to the bottom tier, a teething/rattle toy.

All-in-all it probably took me about 30 minutes to an hour to roll and rubber band all the diapers and another 30 minutes to actually construct the cake.