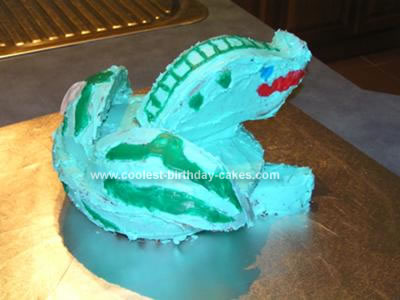 My son who is a big Bakugan fan asked if I could make a Bakugan cake for his 10th Birthday party. Wasn’t sure at first but thought I would give it ago. Used Wilton round soccer ball pan and made the two halves, the only problem was the two sides didn’t turn out even to make a ball shape, so that was when I decided to make the Bakugan in the open position.

With the smaller of the two sides, I cut it in half and then half again to make the wings. Then cut another strip with the remaining half to make the head, with a little leftover piece to make the nose and two small pieces for feet. All of these were attached with skewers and toothpicks into the position I wanted.

Icing was a buttercream icing, tinted with green and yellow colouring to make the body. The patterns were also icing sugar and water with the colouring, drawn on (or can use the icing gel, which would be easier.)

Total time to make this Bakugan 10th Birthday Cake was around 4 hours.