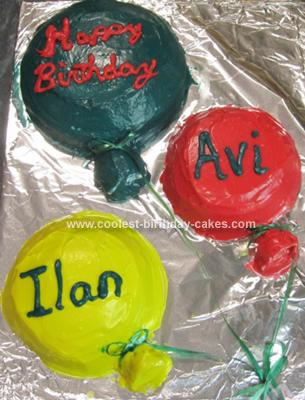 This Balloons Cake was made for my son’s 1st birthday and my husband’s whatever b-day (lol). I got the idea from this website. I baked 3 cakes in those stainless steel bowls. One large and two small. I used the Vegan chocolate cake recipe from The Joy of Cooking. It’s a good recipe and all I did was double it. I used cream cheese frosting that I made using the Wilton’s recipe and adding some lemon zest.

We didn’t have large enough domes so instead of cake we used strawberries for the tails. Just frosted them but I think I should have rolled them in powder sugar first before frosting.

The big cake was cut in half to put filling in it and the other two smaller cakes were left as is and frosted.

The string is curling ribbon which was placed on the cake to make string for the balloons.

These were super easy and a great way to give each birthday boy and special cake of their own.