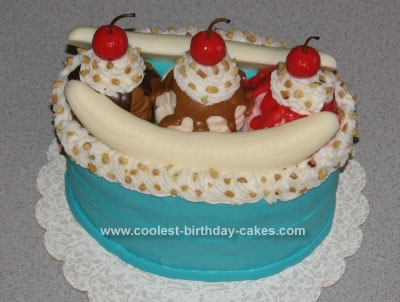 I created this homemade banana split cake using 2 small oval pans which required only 1 box of cake mix. This cake not only looked like a banana split on the outside but tasted like one on the inside. It is a golden vanilla cake cut into 4 layers, layered as follows: Cake-Chocolate mousse with diced cherries-Cake-banana mousse with diced bananas-Cake-White chocolate frosting with diced strawberries-Cake- and then I iced the entire cake with a homemade whipped cream frosting.

Just making all the fillings and different kinds of frosting took quite a long time, but was totally worth it in the end. At least 2 days ahead of time you will want to make all your fondant decorations. I usually use homemade marshmallow fondant, but I happened to have a small box of Wilton white fondant in my pantry. It took a full box to create all the decorations.

I also had a little bit of red fondant leftover from another project and used that to make the cherries. To make the cherries: I used red fondant and rolled them into 3 balls. I then made a small hole in the top center for the stems. I used a tiny amount brown fondant rolled into tiny pieces to form the stems. I then brushed them lightly with brown food coloring to make them look more realistic. I set them aside and let them dry hard before attaching them to the cherries.

To attach them I simply wet the hole in the top of the cherry with vanilla extract and pushed the stems into place. Once you place the cherries on top of the cake, gently brush clear piping gel on each cherry to make them look shiny.

To make the bananas: I took ¼ of the fondant and colored with a tiny amount of yellow, just enough to give it an off-white color. Then I rolled it into a sausage-like log, and cut it with a knife down the middle. I then used a couple fondant tools to make lines on the banana to look a little more realistic. Then I gently bent each banana into a curved shape and let dry, cut side down on wax paper.

You will have to hollow them out a little later to make sure they are not too heavy for the cake, but wait until they are mostly dry so you don’t ruin the shape when you hollow them out. I used a knife and cut a small circle in the bottom and then pulled the entire center out of each one.

To make the syrups: I just colored the frosting I had made, and then melted it slightly in the microwave, put it in a plastic bag, and squeezed it out right on the top of each scoop, then I just let gravity do the rest.

To make the whipped cream: I had to make an extra stiff batch of white frosting to make sure it stayed in place, then I used a star tip, tip 21, and swirled it on the top of each scoop and around the top edge of the homemade banana split cake.

To put the cake together: Remove both oval cakes from pans and cut each one down the middle so you have 4 cake layers. Add fillings between each layer of cake. Frost smooth with icing (you could cover the entire cake with fondant, but I prefer not to eat fondant, so I chose to ice the sides and top of the cake with frosting instead).

I then used a basket weave tip, tip 16, flat side out to put a border around the bottom, like a bowl/dish. I chose not to hollow out the cake; instead I put the ice cream on top in the center, the bananas on each side, and continued to decorate each scoop. Then I used the extra stiff white icing to add the whipped cream around the top, giving the illusion that the ice cream and bananas were inside the dish. I used real nuts and placed them one at a time until I thought it looked done.