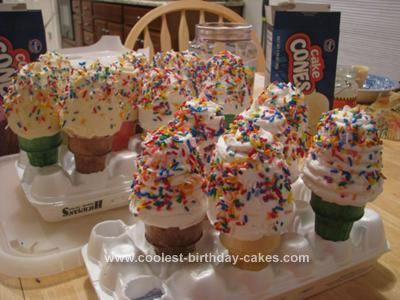 These ice cream cone cupcakes were not too difficult to make and were great fun for the kids.

I started with ice cream cones and jelly beans, but any kind of candy will do. I filled them about 3/4 full and then took a frosted cupcake and placed it upside down on top of the cone. The frosting doesn’t need to be perfect, it’s really just acting as a glue to hold the cupcake to the cone.

Next, take a frosted mini cupcake and place it upside down on top of the upside down regular size cupcake. Again, the frosting is only acting as a glue to hold them together.

To frost the whole thing, I used a bag and piped the frosting on (I had tried using a spatula but the cupcakes were really moist and would only end up crumbling the cupcakes.)

To finish it off, I put some colorful sprinkles on it.

The frosting, I cheated and did not make my own. I bought a tub of white vanilla butter cream from the bakery at the local supermarket. I did not have clear vanilla and the brown vanilla will slightly tint your frosting.

Transporting, I think this is the most difficult part of making these is if you have to transport them since even with the candy inside they are a little top heavy. To solve this, I cut holes in the bottom of egg cartons and placed the cones in the holes. 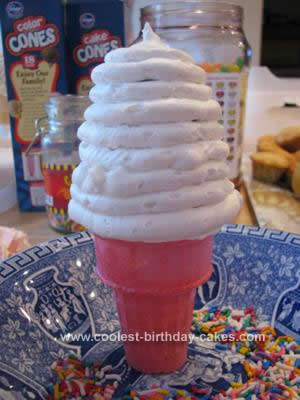 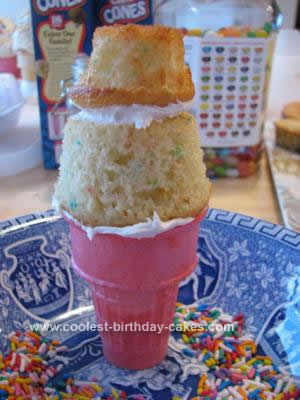 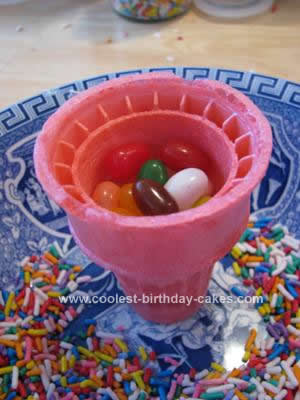