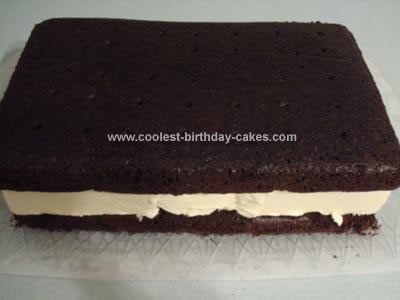 I thought about literally making a sandwich shaped cake that just happened to be an ice cream cake. He would have appreciated the irony. But I didn’t think frozen fondant would go over well. So began my mission to just make literally a “Giant Ice cream Sandwich”.

I began with two 13 x 9 brownies. Mixed up a double batch of brownies, lined the glass pans with parchment paper, plus sprayed with cooking spray. Added a few tablespoons more water and baked about 5-10 minutes longer than usual. I love fudge brownies, but knew to maintain the exact shape I wanted, I would need to create a cakey, more stable brownie. Once baked,I let the brownies cool in the pan 3 hours, an attempt to ensure no chance of breakage. When completely cooled, I ran a knife through the edges.

I flipped the first layer onto the plate and of course one corner breaks off, I just realigned the layer and hoped for the best for the top layer. Next, I had bought two boxes of vanilla ice cream. I tore the box away from the ice cream. Placed the ice cream cube/rectangle on a cutting board and used the butcher knife to cut straight through the hard frozen ice cream. I did the same with the second box of ice cream. I was able to get exact alignment with my first brownie layer.

Now I re-attempted a perfect brownie layer with the second pan. Thankfully had success and aligned it on top of my ice cream layer. To get the perfect ice cream sandwich replica, I added in holes to the top with a wide wooden shish kabob stick.

I looked perfect and tasted just like the real thing. We were so excited to eat it, we ate it straight out the freezer. Second rounds, proved that letting it sit out at room temperature for 10 minutes before eating, results in not breaking you plastic forks. 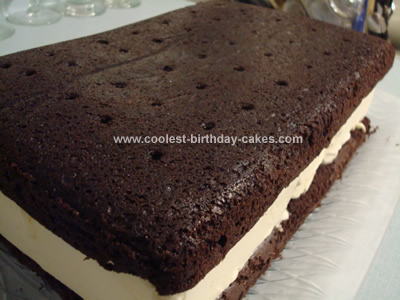 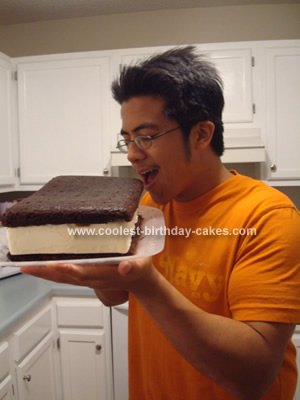