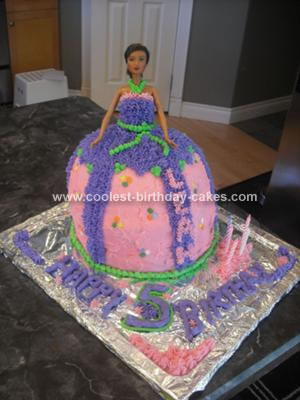 For this Barbie Doll Skirt Birthday Cake I used one of my daughter’s old Barbie dolls (full sized) to make it. I also used a Pyrex dish for the top of the skirt and 3 round cakes for the bottom. The Pyrex dish took one whole boxed cake and about 45 minutes to bake so the inside was cooked. The 3 round cakes took 1 1/2 more boxed cakes and with the leftover half of the third cake mix, I made 12 cupcakes and decorated them with leftover icing for the Barbie cake. I almost considered not baking the third round, but it would have made the skirt too short, so it’s really important to have that third cake.

Again, I followed assembly instructions from the video. Froze the cakes so I could cut them easily to trim them. I’m not a very good baker at all, so as you can see, it’s lopsided b/c I didn’t do a good job leveling. At any rate, before putting on a crumb coat, the cakes are leveled and the Pyrex cake is cut in half. Then, I just used a steak knife to cut a small hole in the middle of one of the round cakes. To keep everything centered, I used the round with the hole in it and placed it on top of all the other cakes to cut the rest of the holes. To prevent any icing on my foiled cutting board, I put parchment strips under the first round so it can be slipped out later and less clean up. I layered the cakes on top of each other with buttercream between each layer and then put on a crumb coat and placed it in the fridge over night.

Decorating took on a life of it’s own. I did the whole cake in pink buttercream and left it kind of rough like material. Then, used the little flower pattern with the star tip to cover the top in purple. I thought that other cakes looked nice with some pattern draping down, so I did some of that and bustled it at the back. I decorated up the Barbie’s torso with the purple and trimmed it with the pink. I had sprinkles so I put them in groups of three on the skirt to color it up. With leftover green icing from my son’s Lego cake, I scalloped the bottom of her skirt and created little buttons around her neck and a belt. I also clustered little green buttons around the bustling area, to accent, too.

Finally, I did the Happy Birthday but didn’t have room for my daughter’s name so I just did that in pink roses down the purple strip. I didn’t want to stick candles into the skirt, so I made some larger roses to hold the candles on the cutting board. I wished I had a nicer serving platter. Would do that next time. As well, when I froze it, the cake shrunk a bit, so before serving I had to add more purple flowers as the doll separated from the cake. I would suggest putting more icing in the middle to hold it all together.

Good luck! This was a lot of fun. 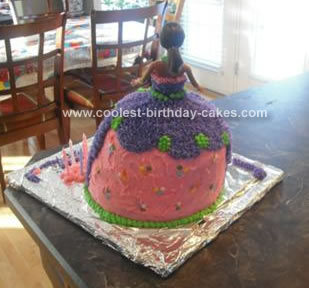