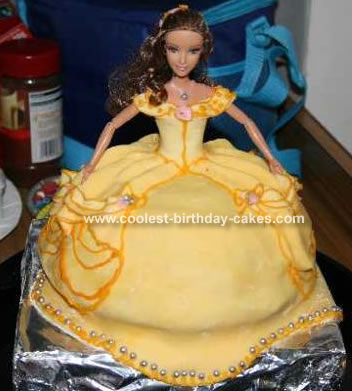 This is a picture of the Belle cake I made for my daughter’s 4th birthday party. She loves the Disney princesses and the colour yellow so Belle was the perfect choice.

The cake is a Madeira sponge that I made. I baked it in an oven proof mixing bowl, which I covered with baking parchment to avoid browning too much. It took a long time to bake, 1 1/2 hours as it was a large cake.

When the cake had cooled I cut it in half and put jam in the center. I then measured the Barbie doll against the cake to make sure the cake was the correct height. The doll was a bit too tall so I put the cake on a square box covered in foil and cut a void for the dolls feet to go down into. With a knife I cut a hole in the middle of the cake to fit the doll through. I wrapped the doll in cling film and positioned her into the cake and down into the box.

I then put butter icing all over the outside of the cake, before icing. To ice the cake I used ready made fondant rollable icing. I coloured the icing yellow and rolled it out into flat sheets that I could wrap around the cake, to make the fabric of the dress. I also covered the body of the doll in icing, to make the bodice of the dress. To finish it off I piped detailing around the dress, with a piping bag, then I added edible silver balls.

My daughter was over the moon with her cake and all the other mums wanted to know how I did it, a great success!