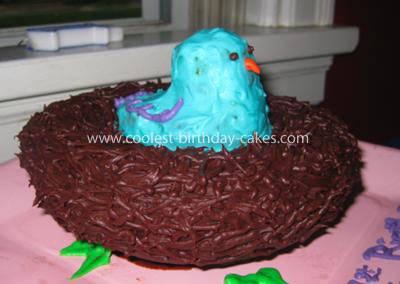 This Bird Cake was a smash cake for my friend’s daughter’s first birthday party. I got the idea after seeing an internet picture of a Sesame Street cake with Big Bird sitting in his nest.

For this cake I used half of the Wilton ball cake pan and two cupcakes. After baking, cooling and leveling the half-sphere, I frosted it with chocolate frosting with the flat side down, then flipped it over. I scooped out some of the cake to give the bird something to sit in and make it more nest-like, then frosted the top part with chocolate frosting. For the bird, I carved the body out of an upside-down cupcake with some extra cupcake glued on with frosting to the tail end (left over from the cupcake I cut the head out of) to elongate it.

I frosted the body first, then frosted the head and attached them together once the body was placed. After placing the bird in the nest, I used extra frosting to smooth out the body /neck junction and make it look uniform. Since it was a smash cake we didn’t use toothpicks to hold the bird together, but for any other purpose I would have used a toothpick to make it more stable as it was a pain to get the frosting to look the way I wanted with the head sliding around every time I tried to use the spreader!

I then piped the wings and tail outlines, the eyes and the beak. Finally I used extra chocolate frosting to pipe the nest effect, doing an overlapping “pullout” technique with a regular writing tip – the easiest and most fun part of the whole cake. We had it sitting on a paper plate and wrote “Happy Birthday” on the plate, then piped some leaves at the base of the cake on the plate with the assistance of the honoree’s 3 year-old sister who helped “design” the cake.

The frosting I was using was a little too thin and therefore difficult to spread evenly, with or without a toothpick to stabilize the head, making the bird a little messier and lumpier than I would have preferred (though the 3 year-old, her mother and I rationalized that it looked more like feathers that way!). Aside from that it was pretty easy, and decorating it only took about an hour.

Eggs and Megs in a Nest Cake