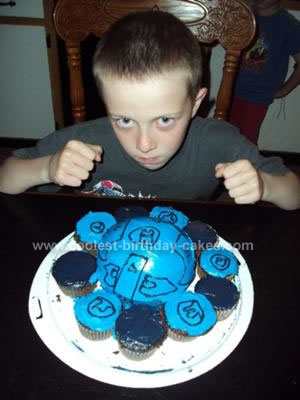 This was my “practice” run using the 3D Wilton sports ball cake. My son really wanted Bakugan for his 9th birthday. I really wish I had more “cake” talent, but to be honest I can’t even frost a plain cake! Most of the other Bakugan cakes I saw on the internet were done with fondant (NOT something I’m wanting to work with), so I knew using regular frosting would already cause me trouble.

I filled the pans to the line as suggested, but the cake didn’t really “fluff” up as much as I assumed from the pictures (lesson learned). I used a boxed chocolate cake mix and canned frosting.

I knew that I couldn’t copy my son’s Bakugan exactly with just frosting and my limited decorating skills, but he seemed pretty happy about it! After getting the frosting tinted, I frosted it all the lighter blue. Then I randomly piped darker blues lines on it to represent the lines that “pop” open.

I used the extra batter to make cupcakes. I meant to just frost them solid, but was having too much fun playing around with the frosting! My son said the little squiggles looked like Bakugans to him (gotta love being appreciated even when it’s not PERFECT).

I’m glad that I had a practice run before his party. I made the next one with batter up to the top instead of the suggested line. I also made it red to look like the “main” character’s bakugan (dragonoid?) to match the store-bought pinata that we customized.