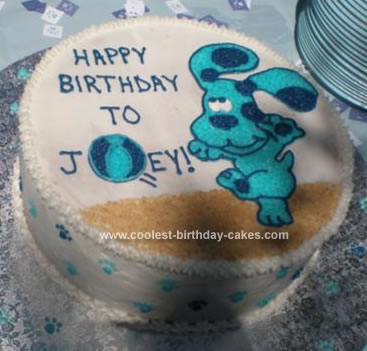 I made this Blues Clues Birthday Cake for my son’s 3rd birthday, because he was so in love with the show! It was a white cake decorated in buttercream icing. His birthday is in July, and I wanted the cake to have a “summery” feel to it, so I made Blue playing at the beach.

I found a picture of Blue from a Blue’s Clues book my son has, and traced it and cut it out, and laid it on the cake, which I had iced white. Then I traced around the edge with a toothpick to get the shape of Blue. Then I used a star tip to color in Blue’s body with light blue and dark blue icing. After that was done, I used dark blue buttercream icing to draw Blue’s outline and her face. I also outlined her spots to make them stand out more.

I did basically the same thing to make the ball- star tip, and then outlined it in light blue icing. I used graham cracker crumbs for the “sand,” which I had to put on very carefully to avoid getting it into the icing. I made a white star tip border with icing around the top and bottom of the cake, a smaller one for the top and a bigger one for the bottom. I wrote my birthday message in buttercream icing as well, and used the leftovers to make light blue and dark blue pawprints on the side of the cake and trailing onto the cake platter.

This cake was fun to make, and my son loved it!