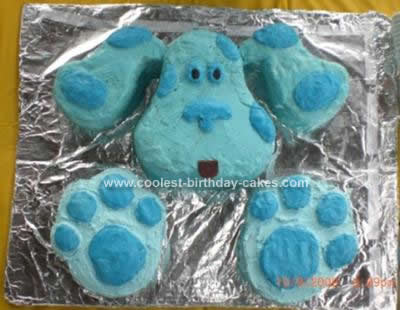 I made this Blues Clues Birthday Cake for my first daughter’s 2nd birthday in October of 2007. It took two days to make. I did the baking on the first day and the icing on the second day. I actually got the idea from this website.

I baked the cake using two regular 13 x 9 baking pans, making it a two layer cake, for the head and two 9 inch round baking pans for the paws (also two layers). I used the Pillsbury Confetti cake mix and just followed the directions on the box. After baking the cakes, I placed them on a cardboard base, tightly wrapped them in foil (plastic wrap can also be used), and put them in the freezer over night.

The next day, I made my icing. It was a buttercream frosting recipe that I got from a friend. After making the icing, I colored it blue using the royal blue from the Wilton icing coloring kit, which can be found at Wal-Mart or Michael’s. I separated the icing into two bowls to make a light blue and a dark blue, using the same color. Be careful not to add too much because a little color goes a long way. After making and coloring the icing, I pulled the cakes out of the freezer and cut their shapes.

To cut the shapes, I used the Blue’s Clues character print outs I got from the Nick Jr. website, placed them on top of the cake, and cut around them. You want to cut the shapes and ice the cakes while the cakes are frozen to avoid too many crumbs and to keep the cake from falling apart. They will defrost pretty fast. I used raisins for the eyes and a fruit strip for the tongue. Happy baking!