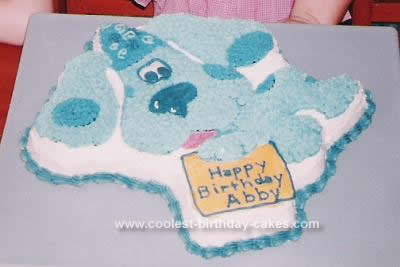 I made this Blues Clues Cake in 2001 in Africa for a colleague’s daughter’s birthday. I used the Wilton Blue’s Clues cake pan and followed the instructions that came with the pan as to the tubes to use. Most of the cake is made with a medium star tube. I used my mom’s home-made butter cream icing recipe, which is really rather simple: a package of powdered sugar, about 1 cup of shortening, 1 tsp vanilla and some milk, then blended with an electric mixer, adding milk or powdered sugar until it is the desired consistency. I hardly ever measure. It is important for the star tube that the icing not be too runny, but that it has a good quantity of shortening and powdered sugar to keep the form of the stars and so they don’t flatted in the heat.

I used paste colors added to the white icing to make the different colors, since I get the best results for consistent color and no bleeding.