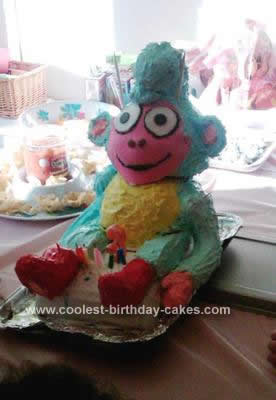 I made this Boots Birthday Cake for my granddaughter’s 3rd birthday party. She is a big Dora the Explorer fan. I used three boxed cake mixes and 5 containers of whipped vanilla frosting which I tinted using the Wilton paste colorings which produce a nice deep color. I made a 13 x 9 inch cake for the base that Boots is sitting on.

I used a Pyrex bowl for Boots’ body and the Wilton Sportsball pan to make the head. After making the cakes and letting them cool completely, I assembled the pieces using frosting between the layers and I covered the cake with a thin crumb coat of icing. I covered the cake with plastic wrap and left in the refrigerator over night. This makes the pieces hold together better and it is much easier to frost the cake.

I used a picture of Boots that I had downloaded to make the face using rolled fondant which I had colored with paste coloring. I attached the fondant face to the head with frosting, but added a couple of toothpicks to ensure that it stayed in place. The eyes were made from fondant and then outlined with black gel icing. The nose was also made from fondant. These were “glued” on with a little frosting. The mouth was drawn on with the black gel icing as well. The arms, ears, boots, hands and tufts on the top of the head were fashioned from Rice Krispies treats and attached using toothpicks. I frosted the cake and all of the Rice Krispies parts with the different colored frostings.

Boots (and the frosted Rice Krispies treats) was a big hit with the kids and the grownups.