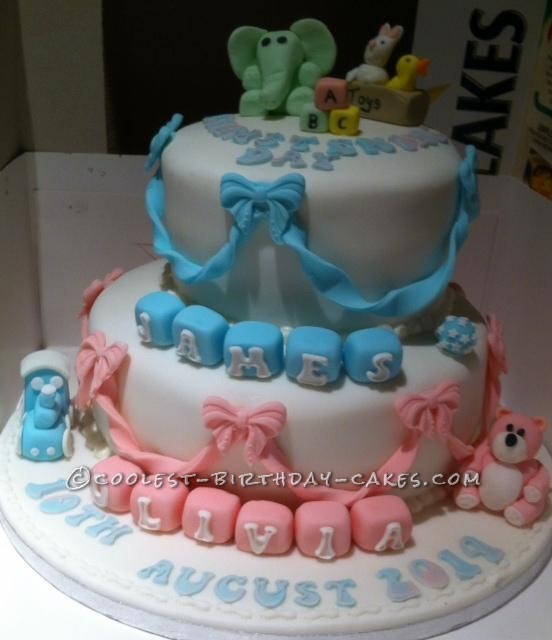 I was asked to make a christening cake for my niece’s sister in law. She wanted 1 tier to be pink and 1 tier to be blue due to her friend’s baby being christened at the same time as her baby and they decided to share the cake.

I have made a cake like this before for my grandson, but this time I had to make the toys in pastel colours.

I made an elephant, a toy box with a rabbit and a duck in it, a blue train, a pink bear, a ball, and ABC blocks. I also made blocks and attached the lettering to spell the babies’ names.

Once set, I placed the larger cake onto the cake board and covered the cake and the board in white icing. I then cut around the bottom of the cake so it would make it easier to cut later. I covered the smaller cake, pushed four plastic dowels into the bottom cake to support the top cake, and then attached the small cake on top using some royal icing to stick them together. These were left overnight to harden.

The next day I started the decorations.

Using some icing 1/2 fondant, 1/2 flower paste in blue I made the swags by rolling out the fondant and cutting them into thin strips I attached one end to the marker by wetting the icing slightly in the corner and pressed it to the cake now I made a few twists on the icing and then attached the other end to the next marker and continued around the cake on both tiers but using the pink on the bottom tier until complete. Then, I attached the bows where each swag started. I used royal icing to do this.

The cake was finished they all loved it!