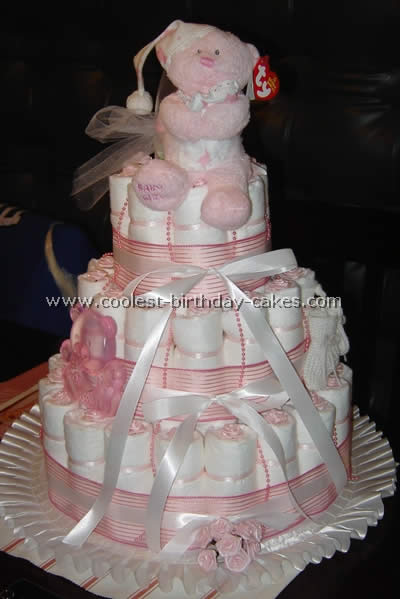 Here are the diaper cake instructions I followed to my my first diaper cake ever. Everyone has their own unique touches so there are endless opportunities. It was a blast to make.

I bought a cake platter from AC Moores, a bottle of baby body wash and a bottle for the center poles (which I filled with pastel dinner mints), diapers and ribbons. I also needed scissors and a sewing needle and string and some rubber bands; of course whichever “baby” items desired for the top are also required. I rubber banded all the inside diapers to save ribbon and time. I can’t wait to make more and get more creative.

One of my best friends was expecting twins, a boy and a girl so we were looking for a shower theme that was both unique and would work for both boys and girls. “Two peas in a Pod” was perfect! I got the idea for a peapod diaper cake online but wasn’t going to spend the outrageous amount for something we could make ourselves. So we just made up our own way of doing it and it turned out cuter than the store bought one!

Here are our diaper cake instructions. First we rolled each diaper up very tightly and tied each with a green ribbon. Then we cut a piece of cardboard in the shape of a peapod. We placed that on the green fleece fabric. Then we just twisted the ends of the green fleece until it was tight. Before we got it too tight we tied two green balloons together and then taped them to the bottom on the cardboard. Then we surrounded the balloons with the diapers. We tightened the fabric until it was tight enough and then just tied the ends in knots.

We drew faces on the balloons with permanent markers and decorated with artificial sweet peas.

I got my diaper cake instructions for this cake partially from this site and partially from a site where you could order diaper cakes online (very expensive)! I made it for my daughter’s baby shower. I used approximately 120-140 Pampers, Swadlers Stage 1.

I started with a purchased 16″ cardboard cake round and topped it with a paper doily. I rolled the diapers and secured each one with a clear hair band. Inside the bottom two layers is a large container of baby powder and there is a 4oz plastic baby bottle inside the top layer. Each circle of diapers in the layer is secured by wrapping it with yarn several times and cinching it snug.

I wrapped each layer with a piece of 2 1/2″ pink ribbon secured with hot glue (secure ribbon ends together so that you don’t get it on the diapers) then put another band of cream colored polka dot 1 1/2″ ribbon around that. I decorated the front with pink and cream flowers and curling ribbon topped it with a cute stuffed toy and decorated the rest of the cake with rattles, bibs, caps, pacifiers, socks, shoes and little girl hair accessories.

Hope my diaper cake instructions will be of help as well.

This is my diaper cake instructions for a diaper cake. In the middle of the cake I placed a bottle of baby bath and then surrounded it with diapers that were rolled. I placed small elastics around the diapers after they were rolled so they would not unroll.

I placed the first layer around the baby bath and then used large elastic to hold them all around the bottle. I made two layers for the inside of the bottom layer and then for the outside third layer I used small elastics to hold the diapers in place while tying ribbon and then took the elastics off.

I used a large ribbon to hold all the diapers in a circle. I repeated this for the second layer using only two layers of diapers. For the third layer I placed one diaper in the middle and then enough diapers to go all the way around. I used a large ribbon to tie around the bottom and top to hold all the layers together vertically and to keep the stuffed duck in place. I bought some yellow and orange spoon/forks from Wal-Mart that I placed around the outside. I also bought some pacifiers, bottle brush and some small items to put around the outside of the cake.

This cake cost about $37 to make and took about 70 diapers. I used about 18 feet of orange ribbon and 18 yards of yellow ribbon.

Cover the flattened box with the tape for extra support. Start rolling the size one diapers held together by the rubber bands and group them in to fours. Fill your box with gifts and wrap it and place in middle of cardboard. Start placing grouped diapers around, forming the base of your cake. Start rolling your size two diapers held together again with rubber bands. When finished group them into two’s. Place on the inside row of base, now starting to cover the sides of you surprise box.

Hope my diaper cake instructions were clear. As you start seeing your masterpiece just about done, there are just a few more finishing touches to add. Start with one color ribbon and wrap it around the base now covering your rubber bands. Tie in a beautiful bow. Repeat alternating colors of ribbon going up the cake.

This is my first attempt at a diaper cake and I was happy with it. Here are my diaper cake instructions: I started out with a shampoo and other bath necessities, wrapped the diapers around that and continued up. Also had burp cloths, socks, onesies that had little cupcakes and candy on it. I got everything from Wal-Mart and it was under $100.

The big rose on top was made out of the onesies. And I did the little washcloth candy wrapped in tulle and tied with ribbon. I even made little corsages with two socks; a plain pink one and the inside sock had all that ribbon fluffy stuff girls wear.

The corsages were for the grandmothers and pinned on with a baby diaper pin. Everyone just thought I was so clever. Let me know if you have any questions. I know I needed help.

I decided to make a diaper cake for my best friend’s baby shower. There was not a theme for the shower so I just did everything pink., , Here are my diaper cake instructions: I began with 116 size one diapers which I rolled individually and used clear rubber bands to secure them. On a large round plastic tray I taped a cardboard holder from a roll of paper towels in the center. For the bottom tier I began placing the diapers around the cardboard until it was almost the same size of the tray. I then used a string of yarn to tie around the diapers tightly to secure it. I repeated this process making each tier slightly smaller than the last until I ran out of diapers.

I decorated the cake with pink ribbon around each tier. I then placed travel sized baby items on the cake. I also used toys, bibs, burp cloths, picture frames etc. To top it all off I placed a cute pink plush bear from Carter’s and pink curling ribbon at the top and outlined the bottom with pink prisms. I also used hot pink sticky letters to spell out the baby’s name – (Skylar) on the top tier.

I made this diaper cake for a friend of mine from diaper cake instructions I found online. We wanted a centerpiece for her table at the shower. This was my first attempt at a diaper cake.

I purchased everything at Target. I wanted it to all match so I purchased items that were within the same pattern. I used 100-Swaddlers #2, three bibs, four onesies, two pants, three blankets, four pair of socks, four spoons and a stuffed bear. Also ribbon rubber bands etc. One thing that comes in handy is push pins. I purchased the kind with the different colored heads. I used the pins that matched the fabric or ribbon accordingly. This avoids glue or tape which may damage some items.

Since I used a larger size diaper and 3-6 months clothing she can wait a little while before she takes it apart for usage. I really had a lot of fun with this. Any one can make one if I can do it!

I made this diaper cake for my cousin’s baby shower. I followed diaper cake instructions from this website.

I used size one and two diapers. I used clear hair bands to hold each individually rolled diaper. Each tier has two alternating layers of ribbon with twine beneath to hold the diapers together.

The top is crowned with a stuffed animal held upright with a small wooden dowel.

Each of these diaper cakes has three tiers, about 50 to 60 diapers. I followed diaper cake instructions I found on this website.

I used sizes one and two diapers. I rolled them and wrapped them with small clear hair bands. I then wrapped each tier with ribbon. The bottom of the cakes is a pizza pan that I wrapped with several sheets of tissue paper. The blue cake has more items in it as I was giving that as a gift – the cake with the giraffe was just a center piece for a baby shower I gave.

This is my first diaper cake ever which I made for a friend of mine. The inspiration came from the Ballerina Bear on top that has a light purple tutu. Here are my diaper cake instructions:

The bottom layer is covered halfway with the skirt part of a dress. I added quite a few baby items like pacifiers, bottle nipples, a bib that says “God Bless My Girl” in Spanish, a baby bottle…some are visible some are hidden. In the center of the diapers the item that is holding the tiers together is a bottle of baby shampoo. I purchased some small flowers and ribbons and the craft store to add that special touch. I think that most of my gifts from now on will be in the form of a cake.

Here are my diaper cake instructions:

I started by building the bottom layer of diapers around a diaper wipes case (the large square ones). I tied a ribbon around the diapers and then took the case out. I bought the Winnie the Pooh play and cuddle gym and took it apart.