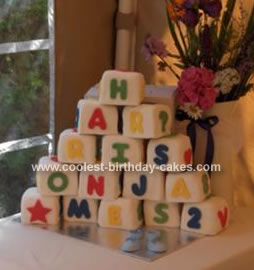 I used a basic Madeira recipe for this sponge cake to make the building blocks cake. I used a LARGE tin (approx 12inch/30cm square. I do not know the exact amount of ingredients I used as I just kept adding more until it looked like enough but it was the biggest cake I have ever made!

When I had baked the cake I sliced it into 16 x 3inch square cubes. I wrapped them individually in clingfilm and froze for a couple of hours. This just helps to stop the sponge crumbling when you are icing it.

Each block had a different letter on the front to spell out my son’s name ” HARRISON JAMES”. You can also put letters on the back but be careful. Ours was supposed to say “CHRISTENING” but when we assembled it we realized the back needs to be a mirror image of the front and it actually spelt “CRHTSININEG” Ooops! It didn’t matter, we just placed it on a table where people couldn’t read the back!

n the sides of the cubes we used the coloured icing for shapes, e.g. stars, hearts etc.

This made a really lovely cake and what was especially nice was that instead of eating it at the party we could give people a whole building block to take home with them. Each block was enough for at least four slices.