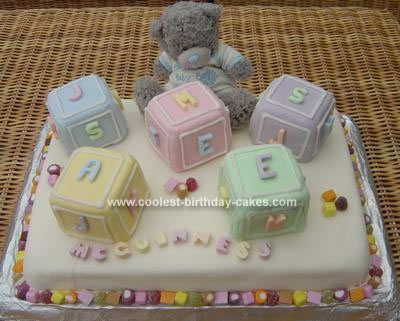 I made this Baby Blocks cake for my Godson’s Christening. I baked a large sheet cake of yellow cake from scratch and also a 13×9 sheet cake to cut up and use for the blocks. Once the cakes had cooled I cut the 13×9 into squares and then froze them both.

When it came to decorating them, I took them out of the freezer and first covered the large cake in a layer of butter cream icing and then put it back in the freezer. I then stacked 2 squares on top of each other and cut them to the dimensions I wanted. I then put a layer or strawberry jam in between the layers and then covered the whole block in butter cream icing and put them back in the freezer.

I then dyed the fondant icing (sugarpaste) 6 different pastel colours (blue, pink, lilac, green, yellow and apricot) and put aside. I then covered the large cake (from frozen) in a layer of ivory fondant. Then I covered each individual block in the coloured fondant. I then used the 6 colours and cut out the letters and allowed them to dry a little. In the meantime, using white tube icing, I iced around the faces of each block and then put a letter in each square. My Godson is named James so I wanted 5 boxes but you need 6 coloured fondants for the letters to avoid ending up with a blue letter on a blue box (for example).

While the blocks were drying a bit, I decorated around the cake with dolly-mixture sweets (candies). I was then ready to place the blocks on the cake. I cut wooden skewers and placed these in the large cake and then carefully placed the block on top. The teddy bear is also positioned to the cake using a wooden skewer (probably scarring him for life!).